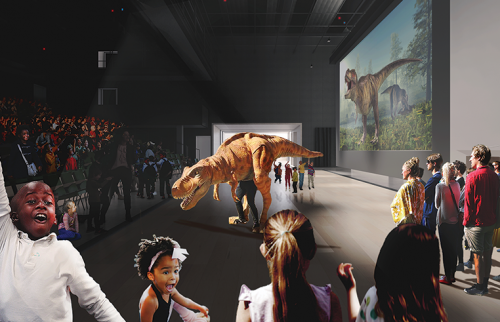 The Natural History Museums of Los Angeles County has announced updates for NHM Commons, a new wing and intended community hub slated to open in 2024 on the southwest side of the Natural History Museum campus in Exposition Park. Progress includes the formation of two new advisory groups, the NHM Commons Native American Advisory Council and the NHM Commons Advisory Coalition. The council’s Native American community leaders are working closely with NHMLAC staff and Studio-MLA to advise on the NHM Commons’ Community Plaza entry and landscaping to incorporate aspects that acknowledge the unceded lands in Los Angeles County and honor the communities of Native Americans who call Los Angeles their home. NHM Commons Advisory Coalition members will consult on community collaborations for future theatrical and public programming, as well as topics and content ideas relevant to their communities.

The transformative $75 million NHM Commons expansion and renovation project, designed by Frederick Fisher & Partners with landscape design by Studio-MLA, will create approximately 60,000 square feet of renovated space and new construction that will serve as both a destination and a portal into the museum, with new experiences designed by Studio Joseph. The indoor/outdoor NHM Commons spaces will enable NHM to expand its community-centered, co-created programming, thereby further connecting the public with science, nature, culture, heritage and community, while creating opportunities for people to come together to experience NHM, with or without a ticket.

“I am thrilled to announce the creation of two NHM Commons advisory groups consisting of incredible community leaders who have joined us to guide program development for this new wing and beyond,” said Dr. Lori Bettison-Varga, NHMLAC president and director.

NHM Commons is part of a larger 10-year institutional vision for increasing access to research and collections that will provide more resources and amenities for neighboring communities and create integrated indoor-outdoor destinations at both NHM in Exposition Park and at La Brea Tar Pits in Hancock Park.