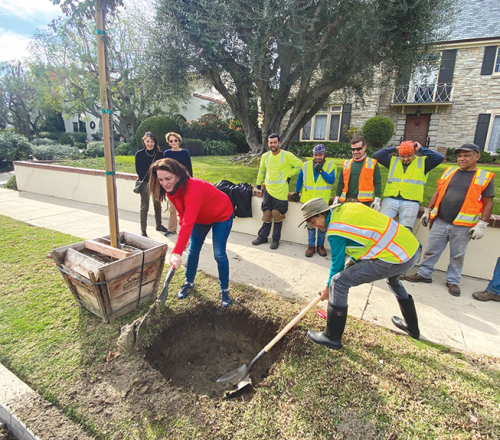 Hancock Park’s urban forest is expanding by 25 new trees through a partnership between the community and the city of Los Angeles.

The Hancock Park Homeowners Association has helped maintain the community’s trees for the past decade and plant new ones when trees need to be removed. Last summer, members of the association’s Parkway Tree Committee, led by chair Deborah Trainer, canvassed the neighborhood to identify trees that were diseased, dead or dying. Due to the prolonged drought, they weren’t difficult to find, said HPHA president Cindy Chvatal-Keane.

“You can usually tell and this year, especially with the horrible drought, a lot of them are dropping branches,” she said.

The list was given to Sabine Hoppner, an arborist hired by the association to evaluate the trees and determine which ones need to be removed. Afterward, the HPHA forwarded the list to the city’s Urban Forestry Division, which arranged for the dead trees to be removed and new saplings to be planted. Because Hancock Park is a historic preservation overlay zone, the Office of Historic Resources was also required to sign off on the tree removal.

“It’s a continuing effort with our partners, the city,” Chvatal-Keane added. “This, start to finish, took about six months.”

“This is community engagement at its best,” Chvatal-Keane said. “The more trees we plant, the better it is for our environment.”

Los Angeles City Councilwoman Katy Young Yaroslavsky, 5th District, stopped by the tree planting on Dec. 16 and helped dig a hole for one of the saplings. She said the project falls in line with her goals of improving the environment and combatting climate change.

“We need this in every neighborhood, all the neighborhoods of Los Angeles,” Yaroslavsky said. “I think it is a great model. It’s fabulous that they are doing it here, but we need to do it everywhere and figure out what each neighborhood needs to make it happen.”

Chvatal-Keane said she plans to work with other homeowners associations, community organizations and neighborhood councils to expand the tree planting program in neighborhoods surrounding Hancock Park. She added that the association can provide information and help people get started with tree planting.

“This pass was about 25 [trees] and we’ll continue to do it,” she said. “It’s a continual program with the city and with the neighborhood. If we can show these steps to other neighborhoods, that would be great.”