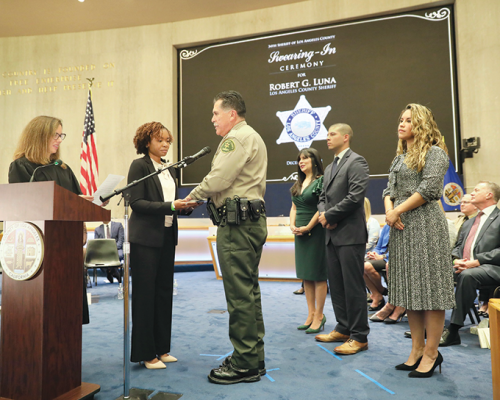 Los Angeles County Sheriff Robert Luna was sworn in on Dec. 3, and started his new position on Dec. 5. (photo courtesy of the LASD)

New Los Angeles County Sheriff Robert Luna began his tenure on Dec. 5 by holding a press conference at the Hall of Justice downtown and outlining his plan for the department. A top priority will be creating a collaborative work environment with the rest of county government, Luna said.

“Integrity is about treating people with respect and living up to the Law Enforcement Code of Ethics,” he added. “Accountability is not something to be feared, but rather embraced, as it is the cornerstone to any successful law enforcement agency. All of us, starting with me, will be accountable to the people we serve. And collaboration is the best way to reduce crime and to work with our community in partnership.”

Luna was elected as the 34th Los Angeles County sheriff on Nov. 8 and was sworn into office on Dec. 3. In line with the county charter, Luna took command of the department on Dec. 5.

The new sheriff has a long history in law enforcement. In 2021, Luna completed 36 years of service with the Long Beach Police Department, serving since 2014 as chief of police. He is a graduate of the Federal Bureau of Investigation’s National Executive Institute and National Academy, Harvard University’s program for senior executives in state and local government, and the University of Southern California’s Delinquency Control Institute. Luna also earned a master’s degree in public administration from California State University Long Beach.

“To all you wearing the tan and green, I am forever indebted to you. I talk about respect because this uniform and badge represent all the courageous men and women of this sheriff’s department who every day work on behalf of 10 million residents in Los Angeles County, and it also represents the 139 fallen sheriff’s personnel that have made the ultimate sacrifice serving our communities here in Los Angeles County,” Luna said. “I have every confidence in the sheriff’s department that we will serve our residents of L.A. County to the best of our ability.”

The city of West Hollywood contracts with the Los Angeles County Sheriff’s Department for public safety services. For information, visit lasd.org. and wehosheriff.com.