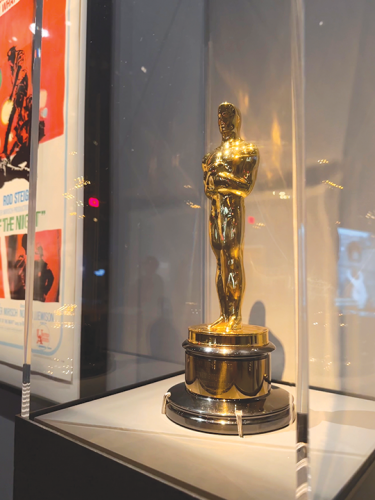 Sidney Poitier’s Oscar for “Lilies of the Field,” the first won in the Best Actor category by a Black man, is on display at the Academy Museum. (photo by Rance Collins)

When the Academy Museum launched in September 2021, it centered around an exhibit highlighting a beloved family classic, “The Wizard of Oz.” With an authentic pair of ruby slippers as the star attraction, a movie of equal cultural weight was needed to follow up Dorothy, the Wicked Witch and Toto, too. With a 50th anniversary tribute to “The Godfather,” the Academy has found an offer you can’t refuse.

“We have some amazing props from the film,” the museum’s chief operating officer Brendan Connell, Jr. said. “We [collected] those from around the world. We also work closely with Paramount who produced the film in getting some wonderful objects.”

“The Godfather,” which opened last month, is not the only exhibit that’s new to the museum. Additionally, an extensive overview of Black-produced cinema gives a stunning overview of race relations between 1898 and 1971. The exhibit, dubbed Regeneration in honor of a 1923 all-Black silent film, gives insight into the little-known but very prolific output from independent studios across America that made films specifically geared toward Black audiences, made during a period in which Hollywood films rarely gave African American actors the chance to play anything other than menial roles.

“[Regeneration] is something that I’m very excited about because working in the museum I get to walk through [the exhibit] every day, and I’m learning something different every time. The exhibition was in development when I first joined the museum, so to see it presented is amazing. I just hope that visitors come in and see, because … it’s presented in a wonderfully magnificent way,” Connell, Jr. said.

With rare, stunning footage from some of these movies, along with copious amounts of vintage posters and memorabilia, Regeneration also includes overviews of some of the most controversial, regressive moments in movie history. The racist legacy of “The Birth of Nation,” 1915 D.W. Griffith film that is both credited with revolutionizing narrative features and with reinvigorating the Ku Klux Klan, is included. Studio headshots of contracted Black actors showcase the breadth of talent, though many of these people were never given opportunities beyond playing maids and butlers in mainstream films.

There are also celebratory highlights, such as the items from the barrier-breaking career of Josephine Baker and tap shoes from the famed Nicholas Brothers.

Other new items abound in the museum, such as striking storyboards from classic films like “The Birds.”

“We want people, especially people from the Greater Los Angeles area to come back again and again,” Connell, Jr. said. “The Academy has great collections, [and] we’re really proud to be the stewards of those collections.”

The original desk and chair used in “The Godfather” are on display at the Academy Museum. (photo by Rance Collins)

Among the items in “The Godfather” exhibit, which highlights not only the seminal 1972 film but its two sequels, is the desk and chair (positioned in a meticulously recreated office mock-up from the team that made the television series “The Offer”) used by Marlon Brando. The rehearsal horse head from the horrifying scene in which a Hollywood producer discovers a bloody, dead horse’s head in his bed is on display. It is a fake horse, obviously, but interestingly a real one was subbed in for the take used in the film, much to the surprise of actor John Marley, who assumed the fake head on display at the museum was the one they would be using.

Going into 2023, the museum will continue its film series at its two theaters, as well, including upcoming tributes to film editor Dede Allen and pioneering filmmaker Agnes Varda, who also currently has a special display at the museum.

“We have a great phone programming team that is on staff, and they’ve created they get focused on creating a great, wonderfully diverse lineup of films,” Connell, Jr. said.

The Academy Museum marked its first-year anniversary in September, and Connell, Jr. said that the numbers proved the museum to be popular.

“We had a great year. We sold 700,000 tickets with visitors of all ages and all backgrounds. We were really proud during COVID to be a destination for people from Greater Los Angeles,” Connell, Jr. said.

The Academy Museum is located at 6067 Wilshire Blvd. For tickets and information, visit academymuseum.org.