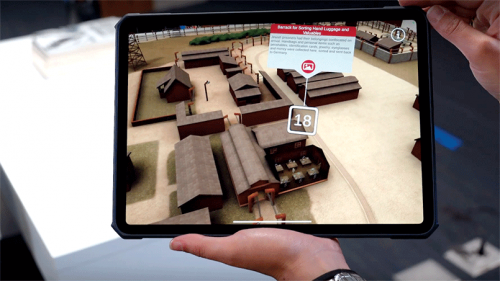 In partnership with arts and technology studio Magnopus, Holocaust Museum L.A. is developing an augmented reality app that allows users to explore an animated model of a death camp from a phone or tablet.

Whether in the museum, at school or at home, users of the app can zoom into different areas of the Sobibor extermination camp, tapping on interactive features for more detailed information, while virtual docents narrate the experience.

“Together, we will ensure the next generation connects the critical lessons of the Holocaust with technology they understand, inspiring them to be upstanders, and to fight against bigotry,” Holocaust Museum L.A. CEO said.

The museum is seeking additional donations to develop other AR learning materials, including a digital rendering of a Nazi propaganda book, Kean added.

The AR model of Sobibor was developed with funding from Television Studios and The Snider Foundation, and the Jewish Community Foundation’s Cutting Edge Grants 2.0.