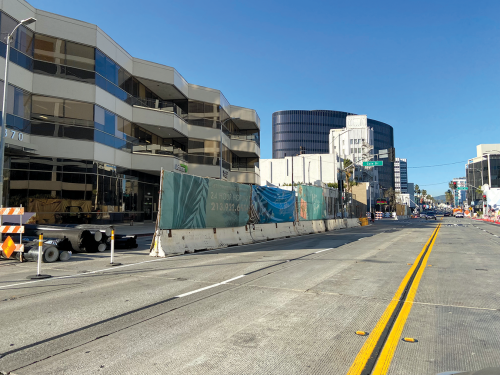 Street-level work has shifted to the south side of Wilshire Boulevard between San Vicente and La Cienega boulevards. (photo by Edwin Folven)

Learn about current work on the Purple Line Extension subway project during an online meeting on Wednesday, Jan. 4, from noon-1 p.m., via Zoom. Metro staff will provide updates on construction in Beverly Hills, where street-level work was halted for the holidays and resumes on Tuesday, Jan. 3. To join the meeting, visit zoom.us/j/96626476708 and use the webinar ID: 966 2647 6708.

Metro is also continuing work in early January at many other locations along the Purple Line Extension project. Between La Cienega and San Vicente boulevards, work has started south of Wilshire Boulevard and will continue for approximately 11 months.

Left turns from Wilshire Boulevard on to La Cienega Boulevard will be maintained during peak use hours. However, intermittent restrictions may be in place between 8 p.m.-7 a.m. on weeknights, and 6 a.m.-6 p.m. on Saturdays. Right turns from southbound San Vicente Boulevard to westbound Wilshire Bouvard may be restricted starting at 10 p.m. through the end of December.

The work supports construction of passageways and rooms adjacent to the Wilshire/La Cienega subway station. Metro will release information prior to additional changes to traffic controls in the area.

Work also continues at other locations along the subway alignment. At the eastern end near Wilshire/Western, construction is occurring in work zones in the middle of Wilshire Boulevard between Crenshaw Boulevard and June Street, and Ridgely Drive and Curson Avenue.

Although street-level work was suspended around the Wilshire/Rodeo station during the holidays, construction continues underground and inside staging areas. Deliveries of material, equipment and concrete will continue daily and may require intermittent lane closures.

Work will continue throughout the first quarter of 2023 in Century City including utility and storm drain relocation along Avenue of the Stars, and excavation of the Constellation station. Partial traffic lane closures are currently in place on Constellation Boulevard to facilitate station excavation, hauling and material delivery for station construction. Eastbound and westbound vehicle access on Constellation Boulevard is being maintained between Century Park West and Century Park East.

Excavation, instrumentation and storm drain work will also continue in Westwood. Through Dec. 30, storm drain catch basins will be installed for the Westwood/UCLA station. The work will be conducted in the southern portion of the intersection of Wilshire Boulevard and Gayley/Midvale avenues. Traffic restrictions will be implemented on Wilshire Boulevard between Veteran and Gayley Avenues.

At the Westwood/VA Hospital station, excavation is expected to continue through the end of December from 5 p.m.-6 a.m. and 5 a.m.-3:30 p.m., Monday to Friday. Work within staging yard includes excavation, hauling, bracing installation, lagging and installation of station ventilation.