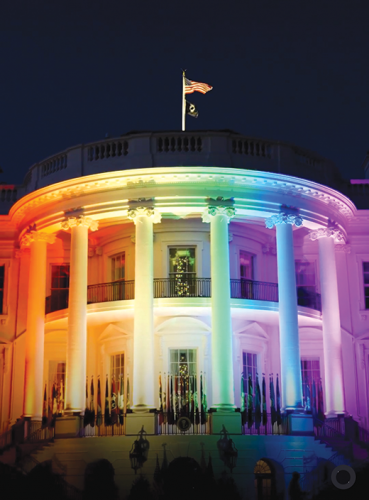 The White House was illuminated in rainbow colors to mark the signing of the Respect for Marriage Act on Dec. 13. (photo courtesy of The White House)

In a May 2012 interview on “Meet the Press,” then-Vice President Joe Biden made history as the highest-ranking official up to that point to come out in support of marriage equality. On Dec. 13, 10 years later, Biden signed into federal law the Respect for Marriage Act, which codifies protections for same-sex and interracial marriages. It repeals the 1996 Defense of Marriage Act, which banned recognition of same-sex marriages.

“Marriage is a simple proposition,” Biden said at the signing. “Who do you love, and will you be loyal to that person you love? It’s not more complicated than that.”

“[It] is a historic day,” Sen. Dianne Feinstein (D-Calif.) said. “Marriage equality has been reaffirmed, giving families peace of “The right to marry is fundamental – yet there are still too many elected officials and appointed judges who would do away with this right,” U.S. Rep. Adam Schiff (D-Burbank) said. “I am proud the House was able to put the Respect for Marriage Act over the finish line today, which will ensure that LGBTQ+ couples and interracial couples never again need to worry about whether their marriage will be recognized by the state they reside in.”

“[The law] requires all marriages to be recognized across the country, no matter where the marriage is performed,” West Hollywood Mayor Lauren Meister said. “Although this is long overdue, it is a positive step for marriage equality for both same-sex marriages and interracial marriages.”

“[The] signing of the Respect for Marriage Act by President Biden is critically important in affirming federal protections for same-sex and interracial marriages. I celebrate this victory for the LGBTQ+ community as we continue the fight for full equality for all people,” said Los Angeles County Supervisor Lindsey Horvath, 3rd District.

“I first introduced this bill in 2011 to require the federal government to recognize same-sex and interracial marriages,” Feinstein said.

Prior to 2008, marriage licenses were briefly issued to same-sex couples in 2004 in San Francisco. Now-Vice President Kamala Harris, then-district attorney of San Francisco, performed some of those marriage ceremonies.

Following several court cases, Prop. 8 was overturned in 2010, California same-sex marriages were reinstated in 2013 and the U.S. Supreme Court ruled same-sex marriages to be legal in all 50 state in 2015. There was initially backlash from conservative areas of the country, but recent polls have shown increasing, majority support for same-sex unions among all Americans. The Respect for Marriage Act received bipartisan support in both the House and the Senate.

West Hollywood was instrumental in its passage. According to Mayor Pro Tempore Sepi Shyne, the city was the first in the country to draft a same-sex domestic partnership ordinance and actively lobbied Congress to pass the Respect for Marriage Act.

“We’ve understood as an LGBTQ majority city the importance and the humanity in allowing marriage equality for all, not only for LGBTQ marriage equality but interracial marriage,” Shyne said. “Decades after Loving v. Virginia we are still needing to have these protections in place, which shows us the very long amount of time that it takes for policy to catch up to cultural shifts.”

West Hollywood resident Eric Stanton Betts married his husband, Gabe Hilden-Reid, in June. He recalled his husband’s aunt Catharine’s toast. She was not going to give a toast, but after hearing from some of the other moms in attendance, she decided to give her own toast from the perspective of a queer woman. 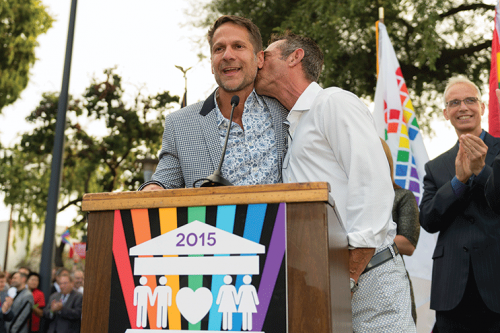 “She spoke about how we were all there to celebrate this wedding, but implored our guests to understand the act of rebellion that it was for two people of the same sex to commit to each other in the institution of marriage,” Stanton Betts said. “She mentioned that our right to marry was not ratified into law and was something that could be taken away from us still, until [Dec. 13]. She even texted the entire family [that day] to exclaim how excited she was that our marriage is now safe and recognized under federal law. I think what it means most to me at this point is that those who came before us, who fought for us, who died for us, who continue to inspire us, are finally seeing their efforts recognized, and it is our duty to take advantage of the rights that they have fought for before our time.”

While the law’s passage was celebrated by Los Angeles LGBT center CEO Joe Hollendoner, he cautioned that the work toward equality is not over.

“We must not forget why we were brought to this moment,” Hollendoner said. “The intentional erosion of abortion rights by the Supreme Court was a warning that our communities cannot depend on the court system’s interpretation of our equality, and that we must codify our constitutional rights into law. Associate [Supreme Court] Justice Clarence Thomas himself linked the rollback of protections for abortion access to a continued rollback of our freedoms to have sex and be married. The Supreme Court is threatening to drag our rights into dangerous territory.”

“We must continue the fight to restore the right to choose, another important freedom stripped away by this reckless Supreme Court,” Schiff said. “We can’t afford to let up when our most basic human rights are on the line.” mind knowing their marriages will be protected by federal law.”