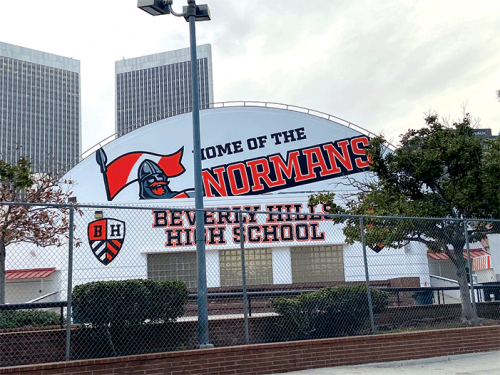 The BHUSD has been named in two civil lawsuits against a former coach who is accused of sexual misconduct during the late 1970s and early 1980s. (Beverly Press/Park Labrea News file photo)

A civil lawsuit filed against a former baseball coach at Beverly Hills High School and the Beverly Hills Unified School District over alleged sexual misconduct that allegedly occurred more than four decades ago is scheduled to go to trial on Feb. 27 in Los Angeles Superior Court.

The lawsuit, filed in August 2020 by a former BHHS student, claims that coach Henry “Hank” Friedman sexually abused her from 1978-80 when she was in the 10th-12th grades. The plaintiff, who asked that her name not be used, said the abuse has had a profoundly negative effect throughout her life.

The lawsuit details that Friedman allegedly asked the student, who was a varsity cheerleader at the time, to participate in a “study.” He allegedly told the student that he needed to measure her body and had her remove her shirt and bra, among other inappropriate acts. The former coach allegedly committed the abuse on multiple occasions, with some incidents occurring in the sports equipment room, according to the lawsuit.

Attorney Stephen Weisskopf, who represents the student, said there are statements from other students attending BHHS at the time supporting his client’s case. Those will be presented at trial, he added. The BHUSD is named in the lawsuit for alleged negligence in allowing the abuse to occur. The plaintiff is seeking unspecified damages.

The lawsuit is one of two pending against Friedman and the BHUSD. Attorney Brian Williams filed a separate civil lawsuit in September on behalf of two other former students, one whom wished to remain anonymous and is listed in the complaint as Jane Doe, and the other a student named Elizabeth Ringer who attended BHHS from 1979-84. According to that civil lawsuit, Friedman preyed on the students’ vulnerability and sexually abused them under the guise of measuring their bodies. The student listed as Jane Doe in the lawsuit attended BHHS from 1975-79.

The sexual abuse is alleged to have occurred in a sports equipment room and Friedman’s office. The plaintiffs in the second case, which accuses Freidman of sexual battery and harassment, as well as the BHUSD for negligence, are also seeking unspecified damages. No court dates have been set for the lawsuit, Williams said.

The incidents allegedly involving Friedman were reported to BHUSD administrators at the time, who in turn notified the Beverly Hills Police Department, according to a Los Angeles Times article from Aug. 11, 1981. Friedman was arrested and charged with sexual assault but was later allowed by the court to plead no contest to a lesser charge: contributing to the delinquency of a minor. Friedman was sentenced to community service and served no jail time. The BHUSD suspended the coach in May 1980 and he was later fired, according to the Times article.

Both civil lawsuits were filed after the California legislature passed Assembly Bill 218, which was signed by Gov. Gavin Newsom in 2019. The legislation temporarily suspended time limitations for filing civil lawsuits involving childhood sexual assault claims for a three-year period from Jan. 1, 2020, through Dec. 31, 2022. The attorneys said their clients had long wanted to pursue lawsuits but were unable to do so because the incidents occurred long ago. Prior to AB 218, the statute of limitations for filing claims expired 10 years after an incident.

“With survivors of childhood sexual abuse, it takes a long time sometimes to come forward, for a variety of reasons. Elizabeth Ringer wanted her name out there as a way of recovering power and saying, ‘yes, this happened, and I am doing something about it,’” Williams said.

Attorney Dana Cole, who represents Friedman, said his client “intends to vigorously defend against the lawsuit” but declined to elaborate.

“These are very sensitive matters,” Cole said. “Hopefully we will get this finalized in the next few months.”

The BHUSD declined to specifically comment on the pending lawsuits. However, the district provide a statement by BHUSD superintendent Dr. Michael Bregy.

“A law enacted by the state of California (AB 218), which went into effect on Jan. 1, 2020, extended the statute of limitations for reporting and filing claims related to the sexual abuse of minors. It affected churches, youth organizations, public schools and other entities. Subsequently, civil lawsuits were filed against the district seeking financial damages for alleged sexual misconduct by a former teacher that purportedly occurred in the late 1970s. This teacher has not been an employee of BHUSD for 40 years,” Bregy said. “The district takes all allegations of sexual misconduct against students seriously. While the district trusts the legal process will provide justice to all parties involved, the safety and wellbeing of our students continue to be our highest priority. BHUSD encourages the entire school community, including employees, parents and students, to report any concerning behavior as soon as it is identified to ensure immediate action can be taken.”

AB 218 is set to expire on Dec. 31, 2022, after which the statute of limitations for filing a claim will revert back to 10 years from the time of an incident. Victims of abuse that occurred more than 10 years ago who do not file a claim by the end of year may be precluded from doing so in the future.

Williams said he is working with the firm Jeff Anderson & Associates, which is seeking other victims who have not come forward. He added that he believes more victims may surface before the Dec. 31 deadline.

“It’s seeking justice and accountability,” Williams added. “AB 218 allowed victims of childhood sexual abuse to come forward, and my clients took advantage of that opportunity. On a personal level, that deadline keeps me up at night. For victims, it might be their last opportunity to seek justice.”

The whole school, I’m BHHS Class of 1980, knew about this, including who, who I will not name