Latest ‘Avatar’ feels like a breath of stale air 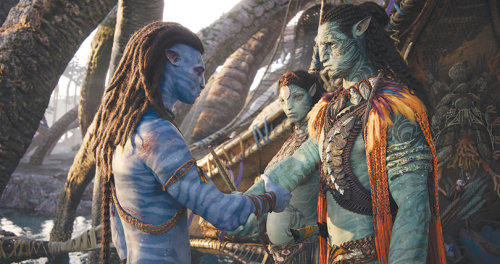 Normally a touch of auteur politics engraved in a creator’s work is splendid, the sign of clear purpose and focus. But James Cameron’s “Avatar: The Way of Water” has the subtlety of an amateur film student’s first short film. He supports ocean life so much, he recreates an alien whale killing sequence ripped from a PSA. And the humans – correction, “sky people” – invading the moon Pandora are even more one dimensional and evil than before.

That’s not all bad. Another film that arrived in 2009 alongside the first “Avatar” portrayed humanity in equally vile terms. But “District 9” enjoys incredible execution of the story and politics baked in. “The Way of Water,” alone a truly cringe-inducing title, doesn’t sail like it should, meaning all those preachy bits feel less forgivable considering their clunky delivery (despite Cameron’s righteous cause).

Atop that, Cameron hasn’t figured out how to avoid the original film’s more problematic portrayal of Indigenous cultures. The trailer first cued us in to this when Jake Sully (Sam Worthington), now loosed from his human body, sported dreadlocks. The immediate response might seem obvious: these are aliens in a sci-fi film, so why should it matter?

That’s the age-old trope: films on planets should be liberated from ours. Sure. Let’s go with that. Then why do the female Na’vi have breasts? Or how about the clear similarities between the Na’vi and our planet’s Indigenous folks, the ones Cameron has oft cited as a source of inspiration. Perhaps we shouldn’t assume this is a story so foreign, especially considering the white (human) savior Jake who now leads a tribe with which he once didn’t even share DNA.

On a more personal note, Jake’s choices sure don’t feel so out of this world. After a long peace on Pandora free from colonizers, the humans return in greater numbers to harness even more of the moon’s resources to save a dying Earth. To lead the next wave, humanity revives Col. Quaritch (Stephen Lang) in an avatar Na’vi body.

Scared for the safety of his family, Jake convinces wife Neytiri (Zoe Saldana) that they need to flee rather than stay and fight. Off to learn about the way of water they go.

Even in a Na’vi body, Jake can’t escape the patriarchy. He constantly apologizes for the behavior of his wife and children to appease reef Na’vi clan chief Tonowari (Cliff Curtis) and wife Ronal (Kate Winslet). Frankly, Jakes seems to learn very little by the end, and Neytiri slips into the background.

“The Way of Water” concerns itself more with some members of the next generation. First up is second son Lo’ak (Britain Dalton), who always receives Jake’s ire for compulsive decisions. Still, he takes to aqua life best, making a few unique friends along the way. Next comes adopted daughter Kiri (Sigourney Weaver), birthed from human Dr. Grace Augustine’s (Weaver) avatar body, something mentioned early but only a slight topic across the film’s 192 minutes.

Lastly, meet Spider (Jack Champion), a human who spends most of his time amongst the Na’vi. And he has the dreads to prove it. (Yikes, just yikes.) Also, fun fact: he’s the colonel’s son, abandoned during the previous human exodus. He hops between the human scientist alias and his Na’vi friends. Perhaps he’ll encounter the Na’vi with his dad’s voice and memories. 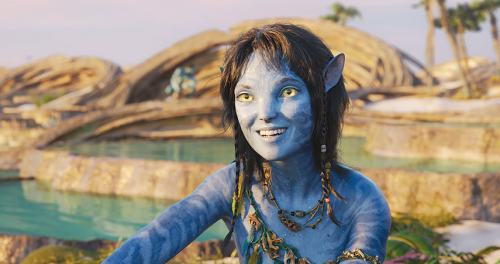 Kiri (Sigourney Weaver) is one of the standouts in “Avatar: The Way of Water.” (photo courtesy of 20th Century Studios)

The plot line’s clunky with what feels like a 50-minute prologue. But when the water arrives, so does the real start of the show. Sorry, it ain’t the actors, story or politics. It’s the pretty things that pepper the screen. Like its predecessor, “The Way of Water” cares more about exploration than anything.

All the cast learned free-diving to bring a slew of scenes to life. The creatures and settings pop in unimaginable ways. That’s to be expected from a film so expensive that it needs to generate $2 billion to apparently break even.

Then comes the explosive conclusion, just like the first flick. Without spoilers, it feels phoned, the product of a Michael Bay film displaced from sincerity. Cringy dialogue, jumbled action and a confusing understanding of geography and physics (sci-fi physics at that). It’s all quite numbing.

With around three more of these films on the way, the “Avatar” series is apparently just gearing up … more than a decade after the first film and a hilarious number of delays. With a shorter runtime and more polished writing, this might be more watchable. As is, it might be worth seeing once out of curiosity. But, honestly, it feels like time passed this story by, a sea of other franchises drowning it out.

Enjoy dinner and a show at the immersive TableMation at SLS