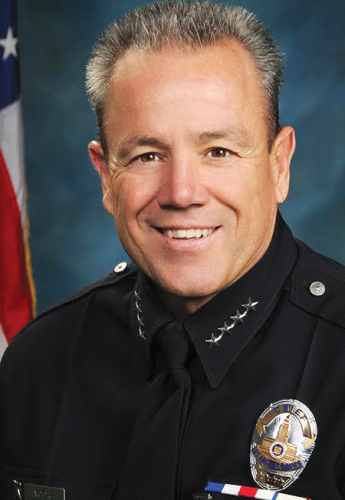 LAPD Chief Michel Moore has led the department since 2018. (photo courtesy of the LAPD)

Los Angeles Police Department Chief Michel Moore has submitted an application to the Los Angeles Board of Police Commissioners seeking a second five-year term. The board plans to review Moore’s performance during the next week and vote on his reappointment on Jan. 10.

The move is procedural under the city charter, which requires the chief of police to reapply after five years. Moore was appointed chief by former Mayor Eric Garcetti in June 2018. Per the city charter, police chiefs can serve a maximum of two five-year terms. Moore needs approval from the board of police commissioners and Mayor Karen Bass to serve a second term.

“It has been my great honor and privilege to serve as chief of the Los Angeles Police Department. Over the course of the last four and a half years, we have accomplished significant reforms, enhanced training and expanded transparency and accountability,” Moore said. “While much has been accomplished, there remains more work to be done.  It is my strong desire to continue leading this department as it strives to improve public safety and trust as we pursue the best practices of 21st century policing.”

Moore, 62, is a 42-year veteran of the LAPD. Bass said she plans to soon review Moore’s reappointment.

“I have been notified of Chief Moore’s request for reappointment,” Bass said in a Dec. 27 statement. “He and I will meet soon to discuss his request and my vision to keep Angelenos safe in every neighborhood.”

Drive sober or get pulled over after new year celebrations