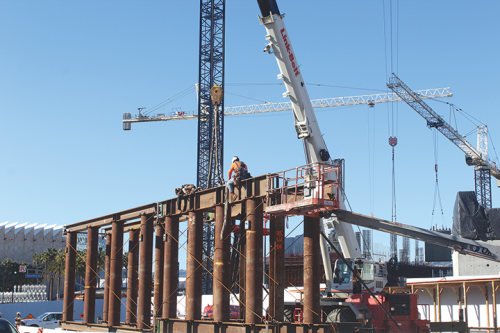 Construction workers on Dec. 13 conducted preliminary work on a new building at the Los Angeles County Museum of Art that will cross over Wilshire Boulevard. (photo by Joey Waldinger)

Crews with Clark Construction were working on Dec. 13 on a “temporary falsework structure” in the middle of Wilshire Boulevard that will serve as a platform to support the bridge, according to a Dec. 13 update from LACMA.

The museum hopes to finish construction of the falsework structure by the end of January.

No traffic diversions or work on Wilshire will be conducted from Dec. 16-25 in accordance with a holiday work moratorium.

Since construction began in 2020, crews have installed 1,500 foundation piles and seismic base isolators, and have built foundations, basements and above-grade walls and decks. The project is anticipated to be completed in late 2024.

LACMA also announced that the capital campaign for the project has reached $700 million of its $750 million goal. Los Angeles County’s contribution toward the building was $125 million, with the balance of funds coming from private sources. The new county-owned museum building will be 80% funded by private donations.

“Reaching $700 million is a huge sign of the importance of this civic initiative,” LACMA board co-chair Tony P. Ressler said. “We appreciate both our county and city leaders who have been unfailing in their support for the project, as well as the many private individuals and foundations, LACMA’s board and Mr. David Geffen especially, that have contributed through their philanthropy to make this project one of the most successful public-private partnerships in L.A. history. We’re thrilled to see LACMA’s newest masterpiece take shape on Wilshire Boulevard.”