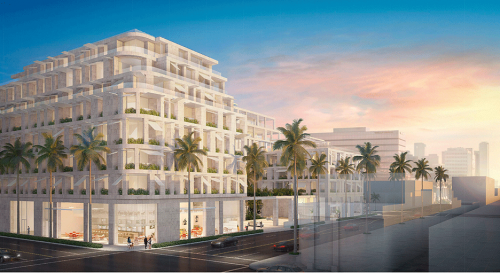 A labor union for service workers is trying to force a referendum on the Cheval Blanc project, which does not allocate money for affordable housing. (rendering courtesy of Cheval Blanc Beverly Hills)

Opponents of the Cheval Blanc project have submitted two petitions to Beverly Hills officials that could force the City Council to hold a referendum on the luxury development.

Beverly Hills City Clerk Huma Ahmed confirmed that her office has submitted both petitions to the Los Angeles County Registrar-Recorder, which now has to certify the signatures. She added that Unite Here appeared to have gathered the requisite number of signatures – approximately 2,194, – though the registrar still needs to certify the figure. Once county officials have finished processing the petitions, they will provide a report to Ahmed, who will present the report to the City Council, she said.

If the county determines that petitioners gathered the required number of signatures, the City Council would then have to either rescind the ordinances or hold a referendum, said City Attorney Laurence Wiener.

It is unclear how long the process would take, Ahmed said.

“Everything is very fluid right now,” she added. “We don’t have dates or timelines right now. We’re still waiting to see if the signatures qualify.”

If completed, the mixed-use project by LVMH would transform the 400 blocks of North Rodeo and North Beverly drives. Consisting of a hotel with 109 rooms, roughly 25,000 square feet of retail space spread over two floors, a private club for up to 500 members, restaurants and a wellness center, the development would be staffed by approximately 250 employees. It could generate as much as $1 billion in tax revenue.

The project has drawn criticism for not including any provisions that would allocate funds for affordable housing.

During the Nov. 1 City Council meeting, when the council approved the development agreement by a 4-1 vote, Unite Here representative Charlie Carnow criticized the city for failing to set aside money for affordable housing.

“The housing crisis is … the biggest issue for the country at the moment,” Carnow said. “If you listen to nothing else, I ask that the development agreement specifically set aside some money so that people who work here can have some hope of being able to benefit from this community’s excellent schools and excellent public services and not spend hours getting home on transit or in traffic.”

Unite Here Local 11 representatives did not respond to requests for additional comment.

Councilman John Mirisch, who cast the sole dissenting vote at the Nov. 1 meeting, said the council had failed its constituents by approving a project that caters to the super rich while providing so few public benefits.

A $26 million “public benefits contribution” that LVMH included as part of the development agreement did not go far enough, Mirisch said.

Other councilmembers, however, said that the project will enrich the city for generations to come.

“I believe that having this project is going to enable our community, and our children and our grandchildren, to thrive,” Mayor Lili Bosse said.

Heilman’s back, ready to work for WeHo

2022 emerges as a year of fresh perspectives