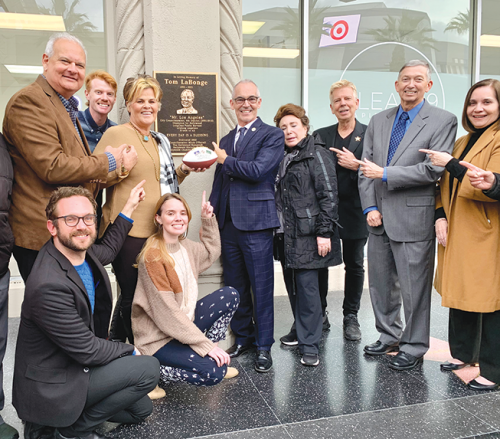 Los Angeles City Councilman Mitch O’Farrell, 13th District, joined community leaders and the family of the late City Councilman Tom LaBonge for an unveiling of a plaque on Dec. 1 outside the Hollywood Roosevelt Hotel. The plaque celebrates the life and legacy of the late councilman and his work on behalf of Hollywood. LaBonge, who died on Jan. 7, 2021, served on the City Council from 2001-15. He was also formerly director of community relations at the Los Angeles Department of Water and Power, special assistant to former Mayor Richard Riordan and chief deputy to the late City Council President John Ferraro. O’Farrell, center, and Brigid LaBonge, the councilman’s wife, celebrated the plaque’s unveiling. They were joined by Jeff Zarrinnam, left, of the Hollywood Sign Trust; O’Farrell’s deputy Dan Halden (kneeling, front); LaBonge’s son Charles and daughter Mary-Cate (kneeling, front); Donelle Dadigan and Steve Nycklemoe, of the Hollywood Museum, and Ana Martinez, of the Hollywood Chamber of Commerce. The plaque is located at 7000 Hollywood Blvd.

Klein receives thanks for ambulance

Horvath sworn in as supervisor