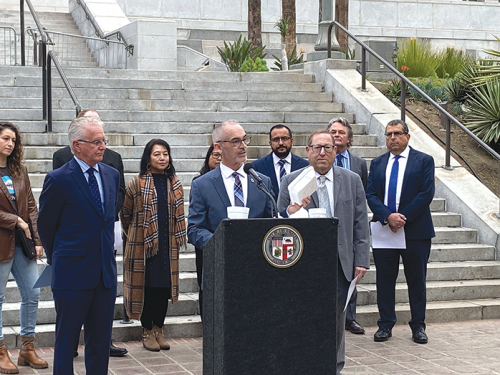 The Los Angeles City Council unanimously approved an ordinance on Dec. 6 that will prohibit the distribution and sale of expanded polystyrene, commonly known as Styrofoam.

The ban on Styrofoam products begins on April 23 and first applies to businesses with 26 or more employees, and will be phased in for smaller businesses in April 2024. At a press conference outside Los Angeles City Hall before the council met to consider the ban, city officials highlighted the detrimental effects that Styrofoam, and other plastic products, have on people, animals and the environment.

“In the movie ‘The Graduate’ in 1967, there was that famous line, ‘the future is plastics.’ Well, the future is not plastics anymore – not in Los Angeles and hopefully not anywhere else in the United States, much less the rest of the world,” said Councilman Mitch O’Farrell, 13th District. “We’ve lived with plastic waste now for 60 years and it’s time to stop the outflow of this terrible pollution that is fouling our waterways, fouling the Pacific Ocean, choking marine life and degrading our environment. Everywhere we look, there are alternatives. And [this] is all about uplifting those alternatives to single use plastics.”

O’Farrell, who is leaving office on Dec. 12 after not being reelected in November, was joined by Council President Paul Krekorian, 2nd District, and Councilman Paul Koretz, 5th District. They were also joined by representatives from the Los Angeles Department of Sanitation and Environment, and the advocacy organizations Heal the Bay and the Surfrider Foundation.

“[The] actions by the council will not be the arrival at a destination, they’ll be another important step forward in a long journey, a journey that has been going on for many years and that will need to continue for years into the future,” Krekorian said. “Councilmember Mitch O’Farrell and Councilmember Paul Koretz have been among the leading champions on all environmental issues, and particularly around plastics and climate change and so many other issues. The work that they’ve done in [City Hall] will have a lasting impact for many, many generations to come.”

Koretz, who is termed out of office and will be leaving the council on Dec. 12, said he hopes more is done in the future to stop the proliferation of plastics and the destruction of the environment.

“EPS foam, also known as Styrofoam, is toxic from production to usage to landfill,” Koretz said. “The styrene and benzene in EPS are both known carcinogens and can also negatively affect workers inside EPS factories. The manufacturing process can contaminate neighborhoods outside EPS factories. The toxins can leach into hot drinks and food as people use cups and food containers. And then EPS ends up as little white bits marring our world-class beaches. Even worse, the manufacturing process releases significant amounts of hydrofluorocarbons, which are massively potent greenhouse gasses. It’s way past time for Styrofoam to go away forever.”

The ban on Styrofoam was part of a package of motions approved by the council on Dec. 6. The council expanded an ordinance banning single-use plastic bags at grocery retailers to include apparel stores, farmers’ markets, hardware stores, food and beverage facilities and open air markets. The council also asked L.A. Sanitation and Environment to report back by April 2025 on the efficacy of the regulations and whether more stringent rules are necessary. The department was tasked with creating an educational campaign about the new ban, and to work with other city agencies and department to implement a zero waste policy at city facilities.

“I am pleased that we were able to advance yet another transformative environmental policy with unanimous support of the City Council,” added O’Farrell, chair of the Energy, Climate Change, Environmental Justice and River Committee. “Angelenos want to be good stewards of the environment, and this legislation is reflective of that value, as well as the urgency with which it must be implemented. There is no place in the city of Los Angeles for harmful environmental products like Styrofoam, and with [this] decisive action, we are making that imperative a reality. I hope that future councils, along with other jurisdictions across the country and the world, follow our lead on environmental justice and the elimination of products that degrade public health.”