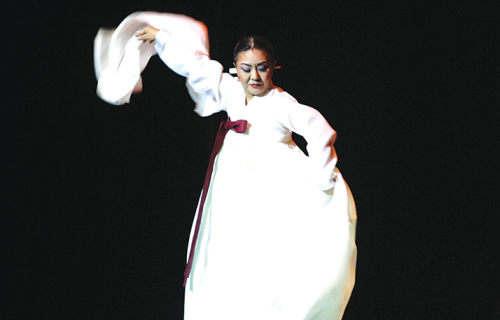 Performers will demonstrate the beauty and intricacies of Korean dance. (photo courtesy of KCCLA)

The event raises interest in traditional Korean music and dance by showcasing California-based Korean performing groups. A traditional fan dance and gayageum performance will be held, as well as the Dongcho Handkerchief Dance and traditional music performances such as Taepyeongmu (Dance of Peace), Jindo drum dance and court music. A performance of “Seungmo’” will also be held, along with the premiere of an original song called “La Muerte Del Amor.”

“Over the past three years, the pandemic situation has been more difficult for artists in the performance industry than any other field,” KCCLA director Sangwon Jung said. “Through ‘2022 Korean Spirits’ at the Korean Cultural Center Los Angeles, we have prepared a place to show high-quality traditional Korean dance and music in one place to soothe the nostalgia of our homeland for our compatriots in Southern California, and to see the rich and diverse Korean cultures for locals in the U.S.”

Admission is free but reservations are required. For information, call (323)936-7141, or visit kccla.org.