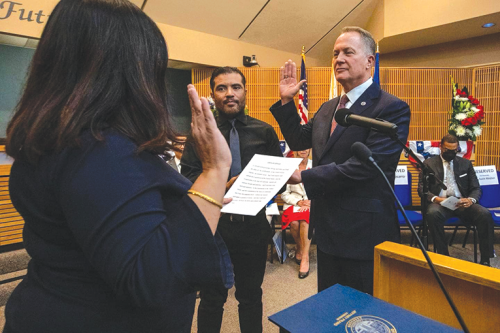 Prang received more than 50% of the votes in the June primary election, eliminating the requirement for a run-off in the November General Election. Prang was first elected county assessor in 2014, and was reelected in 2018 and 2022.

Prang addressed the state of the Assessor’s Office, as well as Los Angeles County, after being sworn in for the third time.

“The letter of the oath I took is to fulfill a constitutional charge of fairly and accurately valuing taxable property, but the spirit of that oath is to put forth all of my effort for the well-being and success of the county and all the people who live in it, an aspiration I devote myself to every day,” Prang said.

Prang oversees a department with approximately 1,400 employees in six offices throughout the county. He oversees the largest local property assessment agency in the United States and is responsible for valuing over 2.5 million real property parcels, which includes land and improvements.

Prang’s primary responsibility is the production of the annual Assessment Roll, which is the inventory of all taxable property in the county. The Assessment Roll serves as an important planning document for local governments as they prepare budgets in anticipation of property tax revenues. It also serves as an important economic indicator about the health of the real estate market.

The 2022 Assessment Roll reflected economic growth for the 12th consecutive year with the increase in assessed value countywide of all taxable property. The roll grew by a record $122 billion (6.95%) over the prior year to $1.89-trillion in total net value. The total net value translates to nearly $19 billion in property taxes for public services.