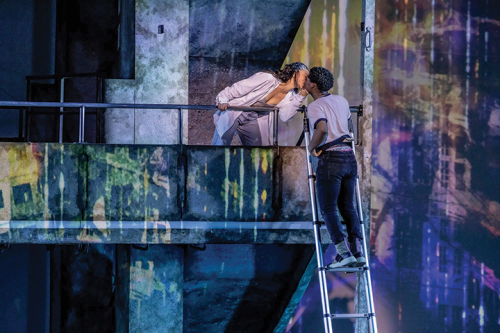 Kay Sibal and Khamary Rose star as Romeo and Juliet in “Invincible.” (photo by Sean Daniels/DVR)

“Romeo and Juliet” has been told and retold over centuries, and “Invincible: The Musical” is far from the first time the story has been translated for a modern era and set to music. Unfortunately, this version, now playing at The Wallis Annenberg Center for the Performing Arts, fails to live up to the quality of its source material, both Shakespeare and the rich Pat Benatar and Neil Giraldo catalogue from which the score is mined.

It’s tough to forget the most famous musical adaptation of “Romeo and Juliet” when watching “Invincible,” which is of course “West Side Story.” That enduring classic changed the setting and created proxies for the original play’s characters, but hit all the same beats. And it is still powerful to this day, whether you look to the play itself or either of the big-budget film adaptations.

The tale of star-crossed lovers from conflicting worlds is hard to mess up, actually. The story is timeless in any era, because it can so easily speak to prejudice and injustice, all through the lens of the most relatable emotion of all: love.

Similarly, the Benatar and Giraldo songs are among the most well-known rock classics in history. The score for “Invincible” has hits like “Love is a Battlefield” and “Heartbreaker.” They, frankly, rock. “Invincible,” as staged, appears to want to avoid rocking out at all costs.

Without giving too much away, because the story does divert in some ways from Romeo and Juliet’s much-trod journey, the finale song, “We Belong,” is a true certified classic. And the original goes there. It rocks. The reimagined version for the musical, however, is a soft ballad, and though there is a logical moment for it to start to rock … even though you can feel the audience craving for the song to rock … it doesn’t. Part of the fun in a jukebox musical is that the audience knows most of the songs. They want to sing along. The curtain call is the chance to do that. But audiences for “Invincible” won’t be able to find the tune.

The story beats are muddled. When Romeo and Juliet meet at a party, and there’s a charge between them, the awkward, cluttered staging fails to give them the spotlight needed to make an impact. In the next scene, they’re ready to get married, but something vital is missing, or perhaps was cut out, that would’ve helped along the central romance. And if you don’t buy the romance in Romeo and Juliet, the rest of the story is moot.

It’s a shame, because there is not a dud in the cast. Khamary Rose shines as Romeo, wringing out emotion from every line. Kay Sibal does likewise as Juliet, and the two make a believable couple. If only the disjointed production didn’t fail them. Again, and again.

It’s unclear where the thread was lost. The creative team is impressive. Director Tiffany Nichole Greene has a laundry list list of credits, and writer Bradley Bredeweg has scores of television and theatrical titles to his name. A previous production, also from the mind of Bredeweg, much different than what is currently being staged at The Wallis, was performed at the intimate (and now-closed) Rockwell Table & Stage in 2015 under the title “Love is a Battlefield.” Perhaps buoyed by the liveliness afforded by the smaller venue, this version was a success and garnered rave reviews. The seven-year road to a larger venue seems to have caused the whole thing to fall apart.

“Invincible” in its current run is purportedly a pre-Broadway tryout. To make it to the Great White Way, however, it is likely the show will have to undergo many, many changes. Maybe the real battlefield was in conflicting creative visions, and this reviewer would recommend going back to the basics that seemed to work at Rockwell.

“Invincible” runs through Dec. 18 at The Wallis, located at 9390 N. Santa Monica Blvd. For information, visit the wallis.org.