Heilman’s back, ready to work for WeHo 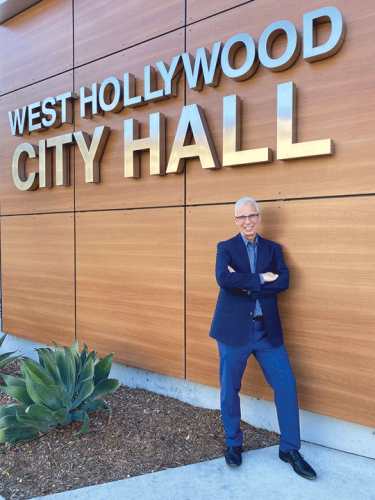 John Heilman, who was among the first council members when the city was incorporated in 1984, was re-elected to the Council in November. (photo courtesy of John Heilman)

It’s not his first time on the West Hollywood City Council, not by a long shot, but the recently re-elected John Heilman is coming into his next term with renewed energy.

“I just know that West Hollywood is going to continue to be a great place. And I look forward to seeing how we’re able to do that in the next four years,” he said.

The last two years, the only two since 1984 that have lacked Heilman on the council, proved to be two of the most interesting in West Hollywood history. As the city climbed out of the pandemic, it also dealt with myriad other issues, such as rising crime rates, controversary over alleged biases within the sheriff’s department and business closures. Not surprisingly, the first meeting back for Heilman on Dec. 19 proved to be one for the record books.

“It was busy. It was long. And there were some important topics. But it was nice to be back. And as I said previously, I am really looking forward to working with the staff and the community to help the city be better and be the best it can be,” Heilman said. Lasting nearly six hours, the meeting devoted significant discussion time to next June’s WeHo Pride.

“We were able to give pretty clear direction about the potential footprint for the [Pride] event,” Heilman said. “And hopefully, that gives our producer and the staff sufficient guidance to make the event a great event.”

Heilman said one of his goals for the future is to streamline these often-unwieldly meetings for the general public.

“One of the initiatives is … moving the council member comments to later in the agenda, so that we can get to the public’s business much earlier. During the council meeting [there were] significant decisions, such as public safety. We shouldn’t be starting that discussion at 9:30 or 9:20 at night. Those kinds of discussions need to be had earlier in the meeting, while we’re all still fresh, while the public can participate. So, I’m hoping that will help expedite a little bit of the meeting,” he said.

Public safety was one of the primary focuses of Heilman’s fall campaign, and it will remain a focus as he moves into his tenure, especially after the Dec. 19 vote that officially cut two deputies from the city’s sheriff’s station.

“The people I talked to are concerned about public safety. They don’t feel safe on the street,” Heilman said. “The statistics that the sheriffs provided indicate that crime is up over last year. And so, I understand people’s concerns. I don’t think it’s a wise move to be cutting law enforcement when people feel that climate is out of control in the community. I’m [hopeful] that the council said they would look at it again, and I’m hoping that they will reconsider it at a later date. I’m also going to bring forth some other initiatives that I hope will address at least some of the concerns people have and hopefully make the community safe for everyone.”

Heilman also spoke to some of the other recent initiatives passed by the previous City Council, including the decision to redesign Fountain Avenue to include protected bike lanes.

“I think the Fountain bike lane proposal is a bad idea. I support having bike lanes, but Fountain is not the right location for it. The council kind of pushed this through without, in my mind, clear understanding of the impact that that’s going to have on all of the side streets, as well as the people who live on Fountain who use Fountain for parking,” he said.

Ultimately, for Heilman, the love of the city is what continues to drive him.

“I love West Hollywood. I think we’re an amazing community. And I think sometimes we forget just how fortunate we are to live in a community with these wonderful world-class businesses that attract so many people. We’re the home of a lot of the entertainment industry and the nightlife and the parties that go along with that. We have incredible residents who are so passionate and so committed and many of them have done extraordinary work in various social service agencies in their professional lives. I think we’re just really, really lucky. And of course, for members of the LGBTQ+ plus community, West Hollywood is really a haven for many of us, and people around the world come to West Hollywood to be a part of that. So, I’m very optimistic about the future. I’d love to be here in 100 years to see how this amazing community continues to thrive,” Heilman said.

Schools grow with a Wallis residency