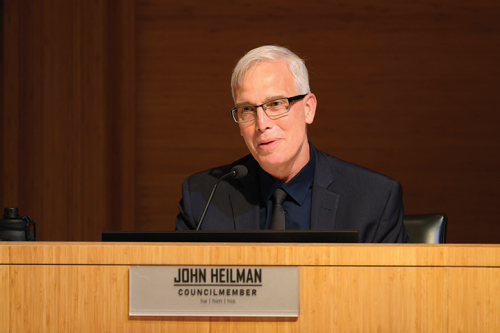 Councilman John Heilman returned to the council on Dec. 19 after a two-year hiatus. He was elected to another term in November. (photo by Jon Viscott)

The city of West Hollywood started a new chapter at the Dec. 19 City Council meeting when Councilwoman Chelsea Byers and Councilman John Heilman were sworn in alongside Mayor Lauren Meister, who was reelected to her council seat in November. The swearing in served as the preamble to a long meeting that lasted until nearly midnight.

“I can think of no better way to welcome (or welcome back) my new colleagues than with a five-hour-long meeting discussing Pride, community safety and our vision for the city of West Hollywood,” Councilman John Erickson said.

At the close of the meeting, Erickson was elected to be the next mayor pro tempore, while current Mayor Pro Tempore Sepi Shyne will become the new mayor. The two will assume their new posts on Jan. 9 at 6 p.m. in a reorganization and installation ceremony in the West Hollywood City Council Chambers.

“It has always been my [hope] to one day serve with someone who I consider a personal hero,” Erickson said, paying tribute to Heilman whom he once served under as a City Council intern. “And my good friend Chelsea Byers … you walked the walk, you talked the talk, you knocked on so many doors, and I never doubted you for a second.”

“John Heilman, you gave me a chance to serve as your appointee on the Lesbian-Gay Advisory Board (now the LGBTQ+ Commission) and then I sat right here in this seat on the Business License Commission from your appointment, and I’m excited to have you now sit next to me,” Shyne said.

Turning to Byers, Shyne noted the “progressive work” she had done for West Hollywood, saying that she has been in the movement to “bring West Hollywood into the future with equity and inclusivity.”

“I’m ecstatic that we still have our female majority, and that we have another incredible queer woman on the dias with me,” Shyne said.

“It will be a pleasure to serve with you both, and I look forward to you getting up here on the dias,” Meister said.

After taking their seats on the council, both Byers and Heilman expressed gratitude to their constituents. 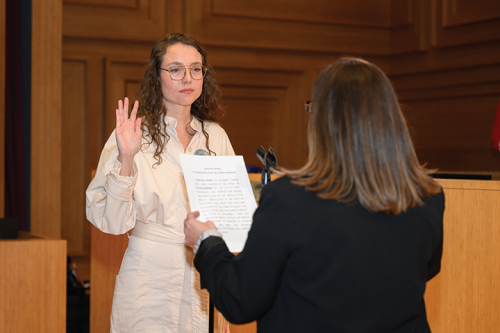 “Thank you all so much. Wow. I’m grateful that my first words in this mic were ‘thank you,’” Byers said, going on to specifically thank those who helped her campaign and “those who held a vision for our community and our city.”

“You are the ones who make it exciting and worth the effort every single day to engage in this work, and I’m so thrilled for the opportunity to co-create the future with you all,” she said.

Heilman thanked the voters for “giving him another opportunity to serve this community that I love so very much.”

“It’s really incredible that we’ve produced so many countywide and state leaders. I guess it says that if you can survive the politics of West Hollywood, you can survive anywhere,” he said.

“I want to thank my campaign team, the volunteers and the voters for making this campaign an incredible success with my 6,070 votes. I don’t often toot my own horn, but I’m going to do it now,” Meister said, who went on to discuss her “core values.”

“[Those values are] listening to one another, respecting to one another, celebrating both our differences and our commonalities, standing up for each other, caring about each other, working together to find solutions to make all of our lives not only more livable, but more enjoyable. These core values inform my decisions in all matters that come before us,” she said.

At the conclusion of Meister’s comments, the first meeting with the new council officially kicked off.

“The swearing in was the easy part, now comes the hard work, and I cannot wait to work with my colleagues for our residents, businesses and those that call West Hollywood home,” Erickson said.