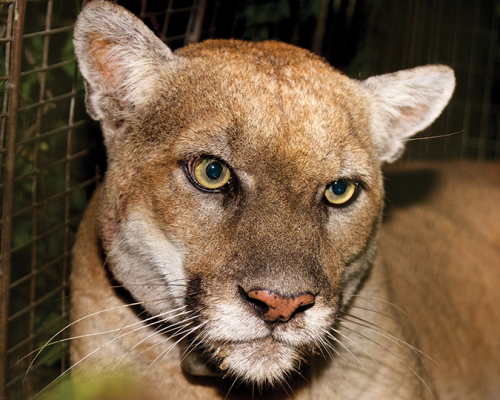 P-22, shown in 2019, was euthanized after authorities determined the mountain lion was injured and in poor health. (photo courtesy of the National Park Service)

The California Department of Fish and Wildlife announced on Dec. 17 that P-22 has been euthanized.

An extensive medical examination by a team of experts from the San Diego Zoo Safari Park determined the mountain lion was suffering from multiple injuries and health problems. Authorities determined P-22 had sustained significant injuries to its head, eye and internal organs consistent with being hit by a vehicle, and would have required invasive surgery. The mountain lion also suffered from irreversible kidney disease, chronic weight loss, extensive parasitic skin infection over its entire body and localized arthritis.

“P-22’s advanced age, combined with chronic, debilitating, life-shortening conditions and the clear need for extensive long-term veterinary intervention left P-22 with no hope for a positive outcome. His poor condition indicated that he may also have had additional underlying conditions not yet fully characterized by diagnostics,” read a statement by the California Department of Fish and Wildlife. “Mountain lion P-22 has had an extraordinary life and captured the hearts of the people of Los Angeles and beyond. The most difficult, but compassionate choice was to respectfully minimize his suffering and stress by humanely ending his journey.”

After surviving in heavy brush on the rugged hillsides above Hollywood since at least February 2012, Griffith Park’s famous mountain lion P-22 is suffering from serious health issues and will probably not be released back into the wild, state and federal wildlife authorities announced on Dec. 13.

P-22 was recaptured by biologists on Dec. 12 after showing signs of distress, including attacking a dog on a leash while the owner was present near the Hollywood Reservoir in November. The mountain lion, which has been studied by the National Park Service since 2012, had a GPS tracker affixed to its collar that allowed authorities to locate it in the backyard of a home near Franklin Avenue and St. George Street in the Los Feliz District, wildlife biologist Jeff Sikich said. Authorities found P-22 hiding in heavy brush behind the home and used a dart to tranquilize the cat. The mountain lion underwent a full medical examination and P-22 is recovering at a specialized facility, authorities said on Dec. 13.

“P-22’s behavior has really changed recently compared to his historic behavior,” said Ed Pert, of the California Department of Fish and Wildlife. “For example, he’s been, over the past month or a little bit more, found not only chasing dogs, but chasing and attacking dogs on-leash with people nearby. That’s something that’s never been seen in the 10 years that he’s been tracked by the National Park Service. He’s also been spending more time in urban areas and going deeper into those urban areas, such as Silver Lake, which he didn’t do historically. So for those reasons, it was becoming clear to the biologists that P-22 may be in some sort of distress.”

California Department of Fish and Wildlife senior wildlife veterinarian Deana Clifford said the examination revealed P-22 is suffering from health issues common among mountains lion in the wild, as well as an injury likely suffered from being struck by a vehicle. National Park Service authorities said they recently received an anonymous report about a driver hitting a mountain lion near Los Feliz Boulevard and Rowena Avenue, but they did not have a specific date and did not locate a dead or injured animal. They surmised it may have been P-22 that was struck.

“The initial examination was performed and it showed that P-22 is significantly underweight, he’s got a thin coat and he has a right eye injury that’s most consistent with recent vehicular trauma,” Clifford said. “He was given fluids with vitamins to correct dehydration, anti-inflammatory and antibiotic medications for the eye trauma, and anti-parasite medications. He recovered smoothly from anesthesia and was transported to a veterinary medical hospital experienced in the care of wild animals for additional monitoring and further veterinary evaluation. He rested calmly and we are still waiting for some laboratory results to come in. He’s in a quiet area of the hospital facility away from people and his behavior, appetite and comfort are being monitored using surveillance cameras.”

“All of our options are going to be based on what the outcomes of the health assessment are and at the moment, it’s not likely that P-22 will be released back into the wild based on his current underweight and the other health issues that he seems to be facing,” Pert said. “But we are trying to leave all options on the table. Another option that people often ask about [is] if you could you just move him out of that area, but again, he’s not going to be released into the wild, and typically, mountain lions don’t do well when you relocate them because they encounter other mountain lions and often fight and kill each other. So really, at this point, we’re probably left with either trying to find P-22 a good home at a sanctuary if his health would call for that. There will have to be an evaluation of how P-22 behaves under those types of conditions.”

Pert also said other options will have to be explored if the medical evaluation determines P-22 has life-threatening internal health conditions such as kidney failure or cancer.

“If P-22’s health assessment comes back very poor, then we will have to consider euthanasia, and what would be probably, sadly, the most humane outcome for P-22,” he added. “I want to make sure that people understand that we all understand that P-22 is a special animal, and like many, many other people, we’ve grown to follow P-22 and we care about P-22. This is not any sort of action, no matter what the outcome is, that we take lightly. We’re just trying to do what’s best for P-22 and that’s often a difficult call. It’s not only a scientific issue, there’s a lot of emotion rolled up in this as well.”

Clifford said P-22 will undergo a follow-up examination in the coming days and veterinarians will use a CT scan to determine the extent of its eye injury. They will also monitor its health and behavior.

“We do think [the injury was caused by] being hit by a car, and there may be a little more trauma than we can just tell from radiographs and an exam. So we’re going to look into that, and that CT scan will also give us more insight into other chronic health issues that may have caused this decline in condition,” Clifford said. “Sometimes it takes a few weeks to fully understand the extent of all the health issues [and] we have multiple lab results that are still pending. It may take a few weeks to fully determine which way he’s going to go, so we want to want to give them a little bit of time and get all the diagnostics we can.”