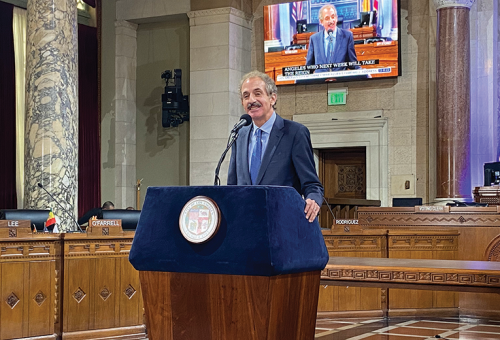 Former City Attorney Mike Feuer thanked his colleagues, staff and the citizens of Los Angeles for their support during the past nine years. (photo by Edwin Folven)

During his nine years in office, former City Attorney Mike Feuer protected the citizens of Los Angeles and gave a voice to those who are less heard, all with the overall goal of making the city and the world a better place.

On Dec. 8, Feuer gave his final address before a capacity crowd of colleagues, staff, friends and family in Los Angeles City Council Chambers. The venerable civic leader outlined some of the successes his office has achieved since 2013, and while he did not specifically state what he plans to do next, Feuer said he is far from finished with his lifelong career of service.

“While public service can be incredibly challenging, there’s no career like it,” Feuer said. “You get to awaken in the morning and say. ‘I’m not sure of the path for the day. What crisis can we solve? What burden can we eliminate? What suffering can we help alleviate? How can I propel the next idea forward? Who can we inspire? What justice can we bring into the world? How can we change the world?’ It’s an urgent life and intense life, a life in which to burn very brightly. This moment, right now, is ‘the’ moment.”

Feuer said his father, an educator, inspired him at an early age to stand up for people in need and to fight for justice. As one of the few Jewish boys growing up in San Bernardino at the time, he said he learned what it was like to be “the other,” and experienced hatred and racism first-hand. He said hardships as a youth helped strengthen his resolve to protect others, and put him on a path toward public service.

“I soon discovered what that work was. It was standing up for people in need. It was fighting for the underdog. It was seeking justice,” Feuer said. “And I’ve been very fortunate in my life to be able to pursue that mission, again and again. I intend to continue to live my life that way. My work so far has been a good prologue, and I’m just getting started.”

Prior to his service as city attorney, Feuer served three terms in the California State Assembly from 2006-12, and represented the Los Angeles City Council’s 5th District from 1995 to 2001. He also previously served as executive director of Bet Tzedek, an organization offering legal services to people who cannot afford them.

Feuer said some of his proudest achievements as city attorney involve public safety and his efforts to curb gun violence, including shutting down properties where drug sales and shootings were common, and protecting children from improperly stored firearms.

“We have accomplished amazing things together. We’ve focused on improving safety and quality of life in L.A.’s neighborhoods, tripling our very successful problem solving neighborhood prosecutor program, creating a neighborhood school safety program, establishing our restorative neighborhood justice program and going after more properties than ever that are the source of guns or gangs or drugs in neighborhoods through our citywide nuisance abatement program,” Feuer added. “From Day One, I envisioned that our office would be a national leader in preventing gun violence. When I became city attorney, I reached out to the district attorney of Manhattan, Cyrus Vance Jr., and said let’s work together to create the nation’s first-ever coalition of prosecutors focused on reducing gun violence. Together, we founded Prosecutors Against Gun Violence, and then dozens and dozens of the leading prosecutors in the United States joined us. We drafted a blueprint for how every state in the nation could get guns out of the hands of domestic abusers. We’ve led efforts to require handguns be stored safely after kids have brought adults’ guns to school. And we’ve prosecuted people who tried to buy weapons when they are prohibited from doing so.”

Feuer said another memorable moment came in 2017, when the Trump administration implemented a travel ban on people from many Muslim countries, barring them from entering the United States. After seeing images on the news of people illegally being detained at Los Angeles international Airport, Feuer drove to the scene and demanded that federal authorities release them. Although he was unsuccessful in getting them immediately released, he said the effort became a lightning rod, defining his office’s resistance to attempts by the Trump administration to roll back progress and curtail freedoms.

“I was unsuccessful at LAX when I tried to get the detainees released one Saturday night, but the very next day, Sunday morning, the incredible response from our staff led to an avalanche of cases in which we played a leading role either as counsel, co-counsel or friend of the court,” Feuer said. “We successfully sued to prevent the administration from conditioning public safety grants here in Los Angeles on making LAPD an arm of civil immigration enforcement that would have made all Angelenos less safe. We led friend of the court efforts to stand up for the dreamers who are so dependent on DACA. We fought for immigrants who were relying on the Temporary Protected Status program. We were in the vanguard of challenging Trump’s efforts to curtail the census and reduce California’s political representation and precious resources. And we joined in fighting the former administration when it tried to roll back efforts to combat the climate crisis.”

Feuer also said he was directly involved in helping alleviate the homelessness crisis in Los Angeles, through efforts such as homeless court, in which citations and fines are removed from people’s records if they agreed to accept services. In his farewell address as city attorney, Feuer also described how he and his wife Gail personally helped a woman experiencing homelessness at the end of his street. They learned the woman was originally from Nigeria and had been an attorney there, and had practiced law in Texas before moving to Los Angeles and falling into homelessness.

“We helped, she got housed, and here’s the thing. I’d given her my business card when we were interacting over a series of occasions, and about three months after our last encounter, I got an email with a subject line, ‘Reactivation,’” Feuer said. “This woman, who if you saw her on the street what you would have seen was a lump with a blanket over it, had reactivated for Texas Bar membership once she got out of homelessness, and she had written to me saying, ‘I’d like you to help me pass the California Bar so I can help people just as I’ve been assisted.’ I came home and I described all this to Gail, and [she] asked me what would happen in L.A. if everyone committed to helping someone else. What if each of us made the decision to help just one person in the year ahead? That’s the L.A. and that’s the nation I want to live in – inspired, idealistic, engaged.”

Feuer said he will always positively look back on his tenure as city attorney and thanked his staff and the citizens of Los Angeles for supporting his service. He also vowed to continue serving as a force of good.

“A number of you have asked, ‘what’s next for me?’ I know myself enough to know that my sense of purpose is deeply tied to making a troubled world better,” Feuer said. “I am built to serve others and I’m going to be making a major announcement soon about what I hope my next step and service will be. It may involve a little competition, we’ll see. I’m all in.”

Mike Feuer is a fine example of a person dedicated to service and finding solutions for those in the world around us. This type of behavior should be instilled in the lives of our school aged children so they may inspire a better city, world and environment.