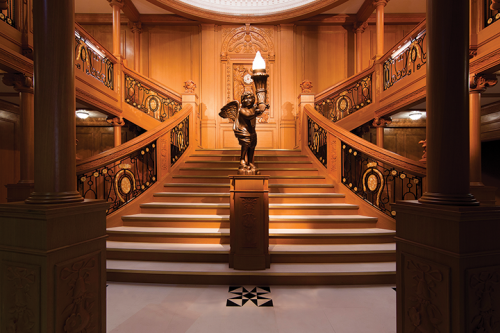 Dec. 19 marks the 25th anniversary of James Cameron’s iconic film, “Titanic” – the multiple Oscar winner and box office phenomenon starring Leonardo DiCaprio and Kate Winslet that brought to life the history of the Titanic along with the fictional love story of Jack and Rose.

Now fans can immerse themselves in the history at Titanic: The Exhibition in Los Angeles, presented by Imagine Exhibitions and Fever – an awe-inspiring journey that tells the chronological and dramatic tale of the design, creation, launch, maiden voyage and tragedy of the largest and most luxurious ship in the world at that time.

From the grand staircase (where Jack and Rose first met), to detailed recreations of the ship’s interior, a VR experience and 200+ artifacts, the exhibition navigates guests through the Titanic’s timeline from sinking to underwater discovery. Guests can also check out props and costumes from the beloved 1997 blockbuster film.

As the largest and most immersive touring Titanic exhibition, the experience is a narrative journey that brings to light the fates of the passengers and crew aboard the sinking ship.

The exhibit is hosted at the Beverly Event Venue, located at 4327 Beverly Blvd., open every day except Tuesday. For tickets and information, visit thetitanicexhibition.com/los-angeles.