Exhibit shows how players of color broke barriers in baseball 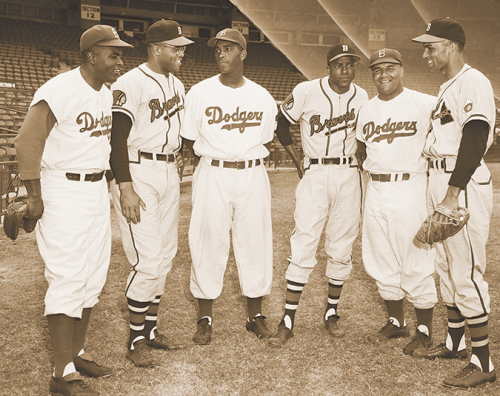 The Los Angeles Public Library presents “Barrier Breakers: From Jackie to Pumpsie, 1947-1959,” a traveling exhibit that tells the story of the Negro leagues and their dedicated athletes on display through Feb. 19 in the Getty Gallery at the Central Library, downtown.

“Barrier Breakers” was developed by the Negro Leagues Baseball Museum in Kansas City, Missouri. Despite Major League Baseball’s 60-year self-imposed barrier that denied players of color the opportunity to play baseball, the Negro Leagues established its own teams and forged a glorious history during an era of American segregation. The exhibit shares the story of the strong-willed men who refused to accept the notion that they were unfit to participate in America’s national pastime.

The exhibit highlights obstacles faced by players of color, what they did to overcome the challenges of prejudice and social injustice, and how their talent, passion and perseverance changed Major League Baseball.

“’Barrier Breakers’ tells such an important and powerful American story, and we’re so honored to host it at Central Library where thousands of Angelenos will experience it,” City Librarian John F. Szabo said. “Our team has selected images from the library’s photo collection to cover the gallery walls and complement the artifacts.”

“This exhibition honors the individuals who, through their dedication and will, broke the color barrier in Major League Baseball and changed the trajectory of our national pastime and America forever,” added Central Library Director Kren Malone. “Making this exhibition available to anyone visiting Central Library serves our goals to educate and inspire current and future generations.”