Enjoy dinner and a show at the immersive TableMation at SLS 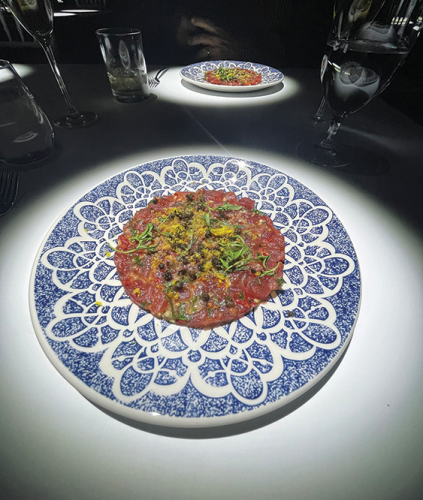 My brother and I started our evening at the newly opened speakeasy, Wasp in a Wig, inside the hotel for a cocktail before dinner. It’s named after the missing chapter from Lewis Carroll’s “Through the Looking Glass” and is hidden behind a mirror until cocktail hour begins at 5 p.m. As the door opens, guests venture inside and order from a beverage menu featuring an array of lost classic drinks. These were popularized in the American prohibition era, but over the years many have disappeared. The Wasp in a Wig brings them back with a touch of modern creativity. Opening in October, this ‘Alice in Wonderland’ design is the second of many exciting new venues planned for the hotel now and in 2023.

“The food scene in Los Angeles is one of the most exciting in the country. There’s this dynamism and willingness to experiment that I really admire and aim to encapsulate with Le Monde restaurant, Wasp in a Wig and the other dining concepts we have in the works,” said Mark Eberwein, general manager at the SLS Hotel. “You can’t rest on your laurels in Los Angeles and our aim is to keep the city coming back to the SLS Hotel for new culinary adventures.”

As we were led to our table, I noticed a friend walk into the dining area and asked if she would like to join us. Then the CEO and president of TableMation Michael Bickel asked if he could join the three of us.

“Collaborating TableMation with SLS Beverly Hills brings the world’s No. 1 dining experience to Los Angeles,” Bickel said. He also shared with us that he had a similar concept at The Ritz Carlton at LA Live at WP24.

This was the third time I have experienced an immersive TableMation dinner and show. The first time was aboard the Celebrity Edge in 2021, at the specialty restaurant Le Petit Chef. I enjoyed the food and show so much that I was eager to experience it again onboard the Celebrity Beyond two months ago. It was a different show and menu of delicious food on the second visit.

Le Monde is the first restaurant to showcase the adventures of protagonists Chefs Nya and Ned as they are beamed down from the ceiling to diners’ tables.

“The characters run across your plate, as well as cook meals that are replicated in the SLS kitchen and presented in front of you,” Bickel said.

The set seasonal menu is enhanced with a recommended wine pairing designed by SLS Head Chef Hussain Zouhbi, who has led the culinary team at the property since it opened, ensuring outstanding epicurean standards.

We enjoyed a glass of bubbly with a beautiful presentation of tuna tartare on a floral blue and white plate. Chef Hussain and his team chop fresh tuna marinated in piquillo peppers, shallots, extra virgin olive oil and a cucumber yuzu dressing. It’s topped with a sprinkle of tarragon, basil, fried capers, amaranth and cured egg yolk. It was delicious.

We watched the plot unfold as a cooking class is ruined by the nefarious Dr. Animator.

Next to arrive on a swirling blue plate was a perfectly poached piece of Maine lobster glistening in garlic butter next to a caramelized pan seared scallop. They were placed on top of smooth black garlic and celeriac puree. Crunchy garlic chips complete this decadent second course.

We watched Ned write to Chef Nya on an animated third-class postcard about his adventures in Italy. The impressive St. Mark’s Campanile Clock tower in Plaza San Marco is displayed. The destination offers a hint about the next course to arrive.

The wine steward poured a glass of Holus Bolus 2017 Presqu’ile Vineyard Syrah to enjoy with the largest farfalle bow tie pasta topped with seasonal winter black truffles, and underneath was a pan seared porcini crusted petit filet mignon in veal jus. Acorn squash and a salsify roasted in brown butter accompanied the filet, which was cooked perfectly and so tender. Some think salsify, also known as oyster plant, offers a delicate taste reminiscent of oyster. I think it tastes more like artichoke. Pairing this course with the lovely garnet colored Syrah adds a snappy stone fruit and hint of raspberry flavor.

The evening show concluded with a thrilling climax at the Eiffel Tower, before the dessert course was delivered to our table. On a black slate, a small bathtub containing lemon lavender sponge cake was filled with lemon curd and crème brûlée. Crème de violet scented tapioca pearls looked just like bubbles floating on top of a bath. A tiny and bright yellow candy rubber duck was a whimsical touch. Also on the slate serving plate was a fire engine red raspberry and pomegranate French macaroon offering a pop of color. The piece de resistance was a clear glass French perfume bottle that our server gave a squeeze to emit a floral rose mist for a multi-sensory finish.

Fireworks burst onto the table top as the credits roll and the dining room applauded Bickel and the culinary staff at SLS Beverly Hills Hotel for this immersive dining sensation.

Latest ‘Avatar’ feels like a breath of stale air