‘Empire Strips Back’ at Montalbán 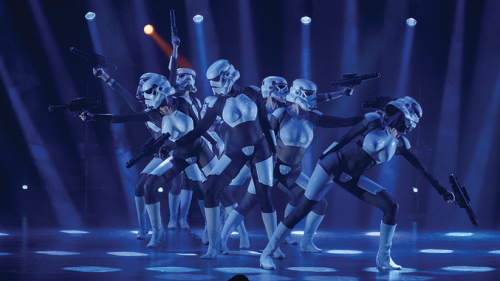 A burlesque parody of “Star Wars” is currently performing in Hollywood. (photo by Craig Ridgwell)

The internationally acclaimed “The Empire Strips Back – the Unauthorized Burlesque Parody” is extending its engagement at the Montalbán Theatre in Hollywood through Saturday, Jan. 28.

Featuring all of the classic “Star Wars” characters, “The Empire Strips Back,” created by Russall S. Beattie, takes audiences to a galaxy far, far away, creating one of the most unforgettable (and unauthorized) theatrical versions of the beloved franchise.

Combining striptease, song and dance, troupe routines and plenty of humor, audiences are transported into the world of burlesque to witness a menacing troop of seriously sexy Stormtroopers, a dangerously seductive Boba Fett, tantalizing Twi’leks, a delightfully lukewarm Taun Taun, a lady-like Skywalker, and of course, scantily clad and daring Droids. Even Darth Vader will explore her feminine side with a fantastical twist.

“The Empire Strips Back” celebrates the resurgence of burlesque, while delivering a powerful experience for fans of the art form as well as the classic film series.

Beattie said that producing “Strips Back” was inevitable.

First imagined in 2011 by Beattie, the original production was booked in a small, 150 seat room in Sydney for a one-off, three-night run. Fast-forward to seven national sold-out Australian tours, an enthusiastic audience of over 100,000+, and a Huffington Post video feature boasting 20+ million viral views.

The Hollywood engagement of The Empire Strips Back is produced by Foster Entertainment and Neil Gooding Productions, presented with Fever and Secret Los Angeles.

The Montalbán Theatre is located at 1615 Vine St. Performances are at 8 p.m. on Thursday and Friday, 7 p.m. Saturday and Sunday, with an additional performance at 9:30 p.m. on Saturday. Tickets start at $44 and are available at empirestrips back.com.

Look what we did with the old tree