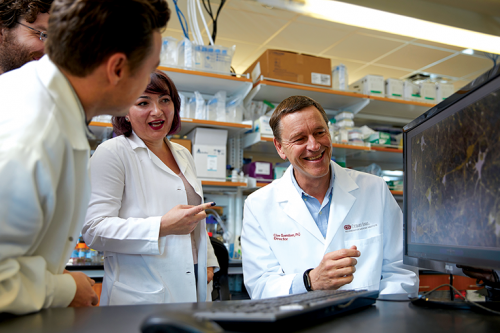 Dr. Clive Svendsen, a pioneer in regenerative medicine, has been awarded the Drs. Ayeez and Shelena Lalji & Family ALS Endowed Award for Innovative Healing for his impactful scientific work being done in amyotrophic lateral sclerosis.

The global award recognizes Svendsen and his team for their transformative scientific discoveries focused on repair and regeneration in ALS, a fatal neurological disorder.

“It’s always an honor to have our research recognized for our dedication in finding new ways to treat such a devastating disease,” said Svendsen, executive director of the Cedars-Sinai Board of Governors Regenerative Medicine Institute. “The award highlights the excitement in the field for these innovative new trials. An amazing team of clinicians and scientists and, critically, patients with ALS all helped to make them possible.”

Svendsen and his laboratory at Cedars-Sinai were honored for their discoveries in stem cell biology that can potentially protect diseased motor neurons in the spinal cord of patients with ALS.

The first part of the award recognized the novel investigational stem cell and gene therapy approach that relies on stem cells originally designed in Svendsen’s laboratory to produce the protective protein GDNF. The cells, in combination with this protein, can promote the survival of motor neurons, which are the cells that send signals from the brain and spinal cord to muscles enabling movement.

Results from the first trial of its kind, published earlier this year in “Nature Medicine,” showed that delivery of this combined treatment is safe in humans.

“Dr. Svendsen and his team’s discoveries represent novel approaches, laying the groundwork for new and improved therapies for ALS, clearing a path to slowing down or halting the nervous system damage that characterizes this terrible disease,” said Dr. Jeffrey Golden, vice dean of Research and Graduate Education and director of the Burns and Allen Research Institute at Cedars-Sinai.

Svendsen shares the award with Dr. Jeffrey Rothstein, professor of Neurology at Johns Hopkins Medicine, for their work on Answer ALS, a cloud-based data resource developed to help identify new subtypes of the disease based on the patient’s own stem cells.

The Drs. Ayeez and Shelena Lalji & Family ALS Endowed Award for Innovative Healing was established to honor Dr. Ayeez Lalji, who has been valiantly and courageously living with ALS since 2017. The mission of the Lalji ALS Foundation is to bring awareness and innovation to help find a cure for ALS.

Svendsen was honored with the award during the Dec. 9 closing session of the 33rd International Symposium on ALS/MND, a conference dedicated to research on ALS and motor neuron disease.

Revitalizing The Den on the Sunset Strip

Melvoin sworn in, again, to L.A. Unified board