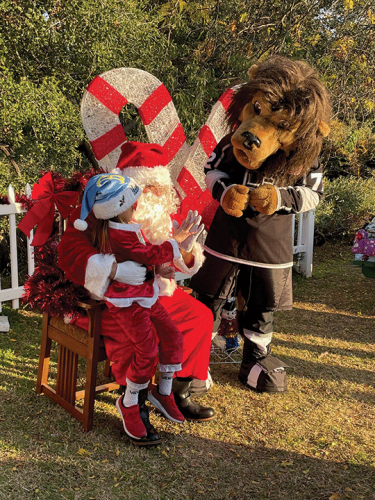 Children’s Hospital Los Angeles’ CATCH Hand Differences Program is a welcoming and empowering community for patients with missing, small or weak arms, hands or fingers. The annual holiday party is one of the biggest and most popular events of the year, and special guests for the Dec. 9 event included the L.A. Kings (Bailey and Ice Crew), Disney Encanto sisters, Santa and even a t-rex and triceratops from the Natural History Museum. Patients Oliver and Obinna had fun playing cornhole, and Ramon dressed up as Santa to meet the man himself.

Per Ramon, three of his favorite things are UCLA basketball, Santa and his doctor Dr. Nina Lightdale-Miric, founder and director of the CATCH Program. When asked him who he thinks is cooler – Santa or Dr. Lightdale – without hesitation he said, “Both!”

There were 206 CATCH members and their families in attendance, a new record for the event, which took place safely outdoors at the Autry Museum, a fitting location given that, thanks to a generous gift from Mrs. Gene Autry earlier this year, the orthopedic center at CHLA was named the Jackie and Gene Autry Orthopedic Center. CHLA’s Orthopedic Center has the most comprehensive programs and services in the Western United States and ranks among the top pediatric orthopedic programs in the nation.