Canteen was testament to American spirit 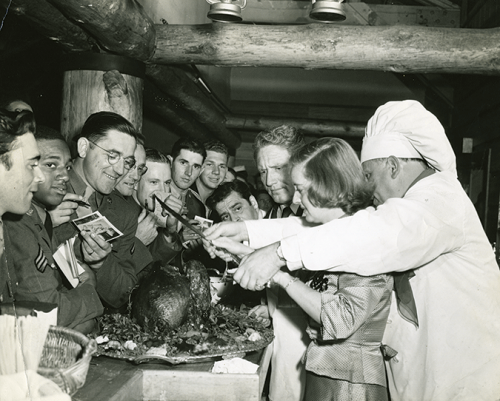 Spencer Tracy and Bette Davis served soldiers a turkey feast for the holidays at the Hollywood Canteen, circa 1944. (photo courtesy of Bruce Torrence)

Many of Hollywood’s stories are the stuff of American legend, but the Hollywood Canteen, an effort by the film industry that perhaps best encapsulated the spirit of Christmas, is often overlooked.

Just months after the Dec. 7, 1941, attack on Pearl Harbor, actor John Garfield visited New York’s Stage Door Canteen, a volunteer organization where theatrical performers and staff operated a night club and soup kitchen for World War II service members passing through the city. Garfield had been rendered 4-F due to a heart condition, and he was looking for a way to contribute to the war effort. He got the idea to establish a similar organization in Hollywood.

Garfield, a contract player at Warner Bros. Studios, met with Bette Davis, another contract player, in the studio’s commissary to discuss the possibility.

“She was so excited about the idea, she agreed to become the Canteen’s chairman,” said author Bruce Torrence, who co-wrote the book “The Hollywood Canteen” with Lisa Mitchell. “In the late 1970s, I met Joseph Jasgur, who was one of the official Hollywood Canteen photographers. After acquiring a few canteen photos from him, I went on a mission of Eighty years ago, the guilds and unions of Hollywood came together to renovate a now-demolished barn of a building located at 1451 Cahuenga Blvd. According to the National World War II Museum, “the décor of the canteen played on the building’s history as a stable employing a western theme.” Many of the decorations and furnishings were also donated to the canteen, including a piano from Cary Grant. A Hall of Honor featured some of the actors who were serving in the war, including James Stewart and Clark Gable.

The Hollywood Canteen opened on Oct. 3, 1942, and operated from 7 p.m. to midnight Monday through Saturday, and 2 to 8 p.m. on Sunday. According to Torrence, the maximum capacity of the building was 500, leading to long lines since roughly 2,500 soldiers visited the canteen every night.

“Because of the canteen’s popularity, the servicemen who had been there for about an hour were asked to leave so other servicemen could enter,” Torrence said.

“There are few accomplishments in my life that I am sincerely proud of. The Hollywood Canteen is one of them,” two-time-Oscar winner Davis said in 1987.

Famous actresses would dance with soldiers, the top musical acts of the day would perform and actors would help in the kitchen. Everyone from Marlene Dietrich, Bob Hope and Rita Hayworth to the Andrews Sisters, Glenn Miller and Dinah Shore gave of their time and talent.

Davis insisted that the canteen be integrated.

“The Blacks got the same bullets as the whites did, and therefore should have the same treatment,” she said, according to Torrence.

During World War II, Black soldiers were relegated to service units, usually working as cooks, cargo handlers and in other labor-intensive, often hazardous positions, Torrence explained. The armed forces were not desegregated until 1948, when President Harry Truman signed an executive order. Even then, it took until 1951 for all military branches to be integrated.

“Even in Hollywood, where Black actors had been making movies with white [actors] since the early days of motion pictures, segregation prevailed,” Torrence said. “Given this climate, the canteen’s atmosphere was all the more remarkable.” 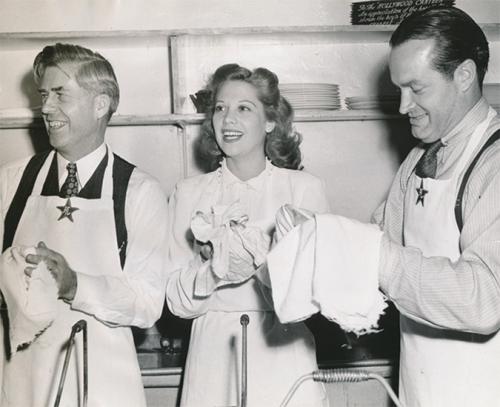 Holidays were a particularly special time at the canteen.

“Because so many servicemen were away from their families at Christmas, the canteen made sure that those who walked through the doors were treated like family. Many turkeys were cooked and donated presents were given to the servicemen,” Torrence said.

The canteen proved so popular that a film was produced by Warner Bros. in 1944 called “Hollywood Canteen,” which included a fictionalized story about the one-millionth soldier to pass through the canteen doors. He wins a date with actress Joan Leslie, playing herself. The movie, available to rent online, also includes other famous stars as themselves, including Joan Crawford, Roy Rogers, Barbara Stanwyck and Peter Lorre.

Torrence said that he doubted that the film community would ever come together in the same way again.

“When World War II broke out, the American public became galvanized in an effort to win the war,” he said. “Men went to war, women took over the mens’ jobs in the factories, rationing took place, war bond rallies were held, etc. The war was truly a world war – in the Pacific Ocean, in Europe and in Africa. Since then, this country, and the world, hasn’t seen that type of conflict. Given how factionalized this country has become, I doubt if [a] canteen type of organization would ever exist again.”

The canteen was open until Thanksgiving Day, Nov. 22, 1945, after World War II had ceased. More than 3,000 individuals from the film industry volunteered their time.

Torrence’s book is available for purchase online and wherever books are sold.