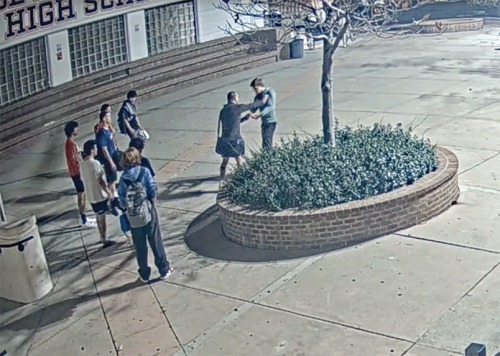 After Beverly Hills High School wrestling coach Ryan Faintich was fired for allegedly shoving a student during an altercation on campus, wrestlers and their families attended a Nov. 22 BHUSD Board of Education meeting to advocate for the former coach, claiming he was being unfairly punished for defending a student who was bullied.

Faintich’s supporters have now ratcheted up their efforts, initiating a recall of three BHUSD board members who they claim failed to uphold their duties amid his termination by the district.

At a Dec. 13 board meeting, Vladislav Shtrickman served notices of intention to circulate the recall petition to newly elected board president Noah Margo, vice president Amanda Stern and board member Mary Wells. The notice was signed by 10 proponents, and alleges that the board members failed to ensure due process, uphold the district’s anti-bullying policies and disregarded the community’s concerns.

Margo and Wells refuted these characterizations, stating the board gave the community ample opportunity to defend Faintich, and adding that his termination was decided by Superintendent Michael Bregy, not the board.

“The board concurred that the superintendent and staff followed all proper procedures in conducting the investigation,” Margo said. “The board … listened to over four hours of public comment, and the statement that was issued by the superintendent was completely accurate.”

“The ongoing grandstanding, all in the name of defending an adult who initiated blatant aggressive and physical contact toward a student, has garnered no change in [my decision],” Bregy stated. “The employment of an individual who initiated aggressive physical contact toward a student puts the safety of all others at risk. More importantly, the vilification of a student who was the actual victim and the ongoing vendetta to isolate that student is the true loss in this situation.”

Faintich was suspended a day after the Nov. 2 incident, in which he shoved a student on campus. The incident was captured by a security camera, and Faintich was fired by the district two weeks later. After a public records request was filed, the video capturing the incident was made public, and shows Faintich shoving the student three times during a heated conversation.

During the Nov. 22 board meeting, some speakers said they were eyewitnesses to the incident, and the boy who was shoved had previously bullied and struck a member of the wrestling team during an off-campus confrontation. Faintich was defending that student, they said.

Margo, however, said that no such instance had been reported to school officials. If Faintich had known of a student being bullied, he should have reported it to the administration rather than engage physically, he said.

“The lapse in judgment is remarkable,” Margo said. “Anything else, from our perch, doesn’t matter. [If] that kid was bullying another kid, that should have immediately been brought to the attention of an administrator, and the coach should not have taken action into his own hands.”

The district takes reports of bullying “very seriously,” Bregy stated, adding that BHHS has resources including the NormanAid Wellness Center and a counseling team with which it can address issues of bullying.

“The district can only address bullying when it is informed by victims, bystanders or employees. The district did not receive any complaint or information from any individual, student or employee alleging bullying prior to the incident,” Bregy stated.

Mark Shtrickman, father of Vladislav Shtrickman – who filed the notices of intention to recall the board members with the Los Angeles County Registrar-Recorder/County Clerk – saw things differently, he said. According to Mark Shtrickman, Faintich was standing up for a student who the district had failed to protect, despite widespread knowledge he was being bullied. “I am very upset about the situation,” Shtrickman said. “[Faintich] did nothing wrong. He was trying to protect one of his students, something the school should have done.”

Shtrickman lamented the loss of the coach, and said the wrestling team is suffering in Faintich’s absence. He also acknowledged that while the recall effort could come at a great cost to taxpayers, he felt it was important to see it through, he said.

Officials from the county registrar did not respond to requests for comment by press time, but BHUSD officials estimated the recall process could cost $1 million and result in county officials taking control of the vacated seats.

For the recall to go forward, the petitioners would need to gather between approximately 4,000 and 4,200 signatures within 120 days, the officials said. Even if successful, there is no guarantee Fantich will be rehired, the BHUSD officials added.

Shtrickman said the potential costs of hosting a recall election, and the possibility that Faintich might not return to his former position, have not deterred him.

“It needs to be done,” Shtrickman said. “The way they handled it was unacceptable.”

Wells was surprised and disappointed to be served the notice, especially after she made so many accommodations to allow for community members to voice support for Faintich, she said.

“I think it’s always concerning to have an action taken like this, for a multitude of reasons,” Wells said. “I don’t think that the statements that are made are accurate, but it really is an unfortunate situation.”

However, not all community members who supported Faintich think they were stifled by the board, Wells said. After the Nov. 22 meeting, she received a message from one of Faintich’s supporters, who thanked her for giving them the space the express their opinions, she said.

Sheldon Lodmer, Faintich’s attorney, said that his client is not involved in the recall effort, and only learned of it after the Dec. 13 board meeting.

Faintich apologized during the Nov. 22 board meeting, stating that while he meant well, he was wrong to make physical contact with a student.

“While I perceived a threat, and while I truly wanted to protect and safeguard my wrestlers, there was a better way to handle it. Let me be clear, we want to be role models, we want to be leaders. And perhaps the best thing I can do is admit, truthfully, honestly, that this was not the way to handle the situation,” he said on Nov. 22.

In his Dec. 15 statement, Bregy said that no BHUSD staff member would ever be allowed to harm a student.

“As the superintendent, please allow me to make my position abundantly clear: initiating blatant aggressive and physical contact toward a student is never and will never be tolerated in the schools I am entrusted with.”

Canteen was testament to American spirit