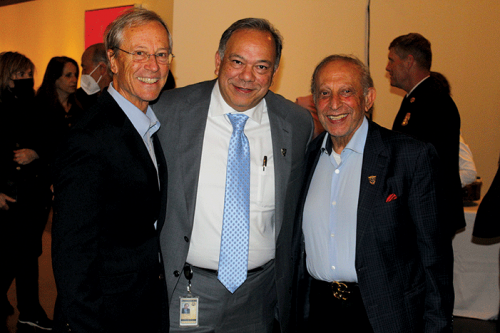 Outgoing Beverly Hills city manager George Chavez grew up in the San Gabriel Valley city of Alhambra with eight siblings. In such a large family, everyone takes on a leadership role, and George was no exception, said his younger sister Rose Austria Chavez. He was always a source of guidance, a dynamic that has continued into adulthood, she added

But Chavez’s leadership instincts were heightened after his father died in 1998, said Raymond Chavez Jr., George’s older brother. Afterward, Chavez played an even greater role in keeping the family close, he said.

“After he passed, we all realized there were distinct roles that he placed [on us],” Rose Austria Chavez said. “I’m sure [for] George, his was keeping the family together.”

The Chavez’s siblings have no doubt that their upbringing and their father’s death helped mold their brother into such an effective city manager. During a Dec. 13 reception in honor of his retirement, Chavez’s impact on Beverly Hills was on full display.

Mayor Lili Bosse opened the informal ceremony by thanking Chavez for his service, and invited anyone who wanted to say a few words to come forward.

After working with Chavez for many years, assistant city manager Nancy Hunt-Coffey gleaned invaluable technical skills from Chavez, but the value of patience was the most important lesson she learned, she said.

Chavez worked for the city for 34 years and became city manager in 2017 after serving as assistant city manager, director of public works and assistant director of community development, and as a city building official.

She recounted gathering inside the city’s Emergency Operations Center as the effects of the COVID-19 pandemic were becoming clear, and she, Chavez and other city leaders coordinated a response. It was largely because of Chavez’s leadership they were able to navigate that difficult period, she said.

“As they say, we all stand on the shoulders of giants, and George is my giant,” Hunt-Coffey said.

Former mayor William Brien got to know Chavez while serving on the Beverly Hills Unified School District Board of Education. Throughout the years, Chavez has remained a trustworthy civic servant, always quick to address the public works issues necessary to keep a city running, Brien said.

Chavez looked out for individual residents, Brien added. He recalled a resident informing Chavez that a pipe broke in their house, and Chavez swiftly getting it fixed.

Beverly Hills Chamber of Commerce President and CEO Todd Johnson, a former restaurant manager, said that Chavez exemplifies all the qualities in people he looked to hire, and added that the city was lucky to have had him at the helm for so many years.

“He’s a class act. I’m thrilled he’s going to kick back somewhere and do whatever he wants,” Johnson said. “He’s an amazing guy and we’re blessed to know him.”

Bosse invited those present in the City Hall municipal gallery to come forward and personally thank Chavez. Chavez stood in place, a permanent smile on his face as he welcomed an endless stream of friends wishing him well.

Despite all the adulation, Raymond Jr. and Rose Austria Chavez had no intention of treating their brother any differently.

“It’s like any other family, we all joke around with each other,” Raymond Chavez Jr. said. “We don’t walk around in reverence of each other. For us, George is George.”

At that moment, Rose Austria Chavez began to laugh. Her brother, speaking with an admirer, shot her a glance, as if to make sure she wasn’t teasing him behind his back, she said.

Chavez will officially retire on Dec. 29. placed [on us],” Rose Austria Chavez said. “I’m sure [for] George, his was keeping the family together.”

Community prepares for Festival of Lights