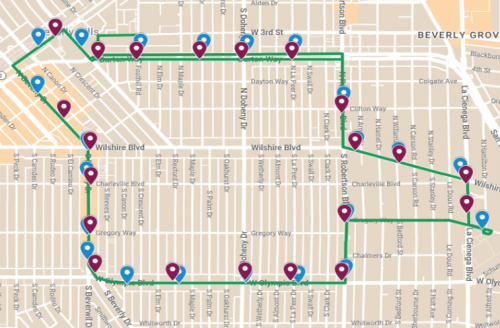 The proposed buses would travel throughout the city’s business district. (photo courtesy of the city of Beverly Hills)

­Next summer, Beverly Hills residents might have a new way to travel through the city. After launching a transit feasibility study in June, the Traffic and Parking Commission is gathering community input on a pilot program for a new bus route circling some of the busiest areas.

As part of the one-year pilot, which would cost approximately $3.5 million, buses would follow a route stretching from La Cienega Park to Beverly Drive, stopping every 15-minutes along high-traffic streets like Wilshire, Santa Monica and Olympic boulevards.

But many details of the pilot have yet to be finalized, as planning officials are determined to shape the program according to residents’ needs, said transportation planner Martha Eros.

“There are a lot of pieces that need to be put in place before we put out such an expensive program, so we want to make sure the community has a voice in this,” Eros said.

Planning officials released a survey in June and held two community meetings in August and September. Eros is encouraging residents to take a new survey available until Jan. 13, and to voice their concerns during public meetings or via email. Asking 13 questions, the new survey gauges how residents feel about the proposed route and how the transit service could best serve their needs.

The Traffic and Parking Commission will examine the results of the survey during its Feb. 2 meeting, and determine whether members need more feedback or are ready to present a proposal to the City Council, Eros said.

If the City Council moves the pilot project forward and approves an outside bid, the commission would then issue a request for proposals to professional transportation agencies, she added.

Eros said the commission hopes to launch the bus route by July, though she added that the process could take longer depending on the response for bids and directions given by the city and residents.

Depending on the feedback, the commission may also propose a “micro-transit” service, which would resemble a ride-sharing service operated by the city. Such a service would be most effective north of Santa Monica Boulevard, according to an Oct. 6 staff report.

The summer’s outreach efforts suggested that more transit options would be a welcome addition, as few Beverly Hills residents use the available services, and even fewer are satisfied with them. 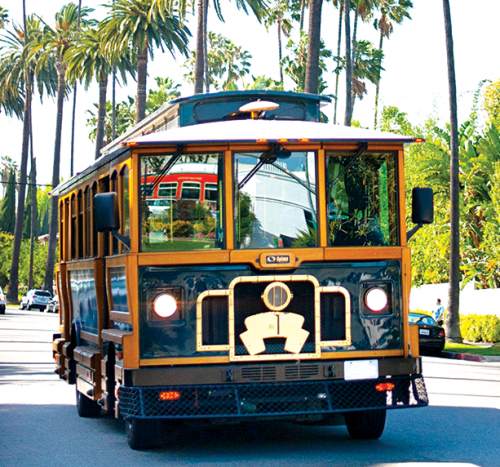 Beverly Hills currently offers limited public transit services, including a trolley that runs along a curated route on “First Thursdays.” A new program would enhance the city’s offerings, establishing a bus route along the city’s busiest streets. (photo courtesy of the city of Beverly Hills)

Approximately 12 residents attended the in-person and virtual meetings over the summer, and approximately 430 people responded to the June survey.

Of the 430 respondents, only 28% (118) said that they take transit within the city, and less than half of those transit users rated the available services as “very good” or “good.”

The most commonly reported hindrance was that riding public transit takes too long, and that the services often run off schedule. The respondents also said that transfers are confusing, and that there are few stops close to where they live.

But the respondents also indicated they would use improved services. Approximately 43% said they have no experience using public transit within the city but plan to do so in the future.

Eros hopes to entice new users by incorporating residents’ concerns into the pilot program. The proposed route will target residential and busy commercial areas, and will use existing bus stops as much as possible, Eros said.

While the proposed route covers some of the city’s busiest corridors, it also includes stops on residential streets like Charleville Boulevard and Gregory Way, she added.

The need for a new transit service grew out of the Complete Streets Plan, adopted in April 2021, Eros said. Officials realized that, beyond making it easier for residents to access services in the city, improving public transit would help the city accomplish its goal of reducing air pollution, Eros said.

“We recognized that we always had this on the agenda, to supplement transit and just to connect the community to commercial areas,” Eros said.

To take the survey, visit surveymonkey.com/r/5NSWKL8.