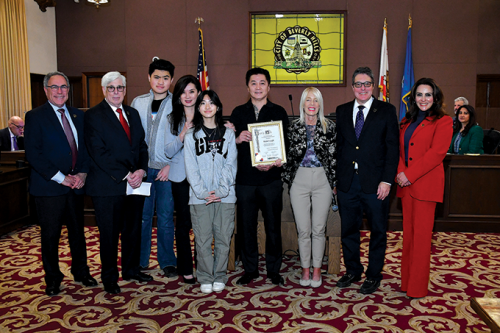 photo courtesy of the city of Beverly Hills

Fred Dijie, the owner of Walter’s Café, and his family were honored with a 60 Second Shoutout during the Dec. 13 Beverly Hills City Council meeting.

The second oldest restaurant in Beverly Hills, Walter’s opened in 1949 on Rodeo Drive, and has changed ownership and location several times since, Vice Mayor Julian Gold said. Fred Dijie’s father, Richard, purchased the restaurant in 1981, and eventually passed it on to his son, Gold said.

“We really love the city, and we’d like to go on for many more years,” Dije added. He also paid his respects to outgoing City Manager George Chavez.

“This amazing gem has become such a staple in our city. Some of the customers and their families have been dining there since day one. I can’t say that, but I dine there a lot,” Gold said.  “Walter’s truly embraces the community as one big family,” he added.