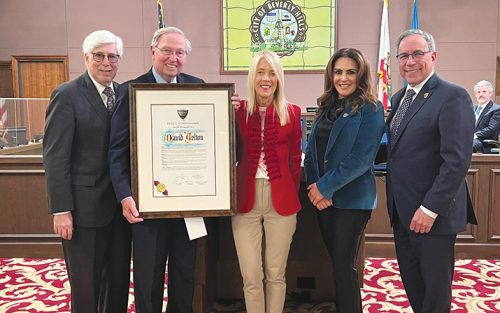 Named after the city’s longtime former executive director of public affairs, the award recognizes an employee who has a true vocation for serving the community and who has demonstrated expertise and commitment with grace and humility. Yelton is the fourth honoree to receive the award, following Cunningham, City Manager George Chavez and Beverly Hills Fire Department Chief Greg Barton.

“I couldn’t think of a more deserving person than David to receive this award,” Mayor Lili Bosse said. “He has shown us how his incredible leadership has shaped a department that works around the clock to go above and beyond for this community. He truly has been an example of remarkable kindness, demonstrating incredible humbleness, as he never wants to take any credit for changing so many lives with his enormous, loving heart.”

Yelton began his career with the city of Beverly Hills as a building inspector in 1998, and rose through the ranks to numerous leadership positions throughout the years.

“I’d like to thank the city of Beverly Hills for entrusting me in the various positions that I’ve held over the 25 years and the opportunities that I’ve had to be able to serve this community,” Yelton said. “With this award, I will cherish it and it’ll be a memory that I will never forget.”