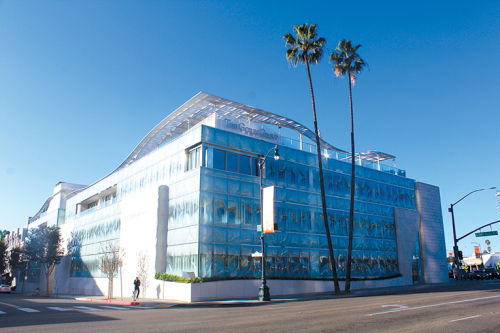 The management behind Spring Place, a co-working space on Wilshire Blvd., wants to host events inside the building. (photo by Joey Waldinger)

In an effort to stay afloat during the pandemic, Spring Place, a co-working space at 9800 Wilshire Blvd. and 121 Spaulding Drive, began hosting events on its rooftop. But these events violated the building’s development plan, prompting complaints to the city and meetings with the City Prosecutor and the Beverly Hills City Council Planning Commission.

On May 26, the planning commission amended Spring Place’s development plan, allowing for members and their guests to use the building’s rooftop for social gatherings with certain restrictions.

But according to attorney Mark Egerman, the amendment didn’t go far enough.

“The banning of events inside of the buildings is designed to destroy Spring Place as a viable business,” he wrote in a June 8 appeal to the planning commission’s amendment.

Spring Place has now asked the City Council to remand the matter to be reheard by the planning commission. At the Dec. 6 City Council meeting, the council unanimously agreed to the request, but urged Spring Place to follow provisions of the amendment, and to display more transparency when meeting with the commission.

During the meeting, planning commissioner Peter Ostroff recalled a prior meeting with Egerman and his Spring Place clients.

“When we were asking them about some of their operations, I asked some questions and Mr. Egerman instructed his client not to answer them based on the Fifth Amendment,” Ostroff said. “That was astonishing to me that that would happen. I don’t want to relitigate that issue, but I would expect them to be completely open with us and answer the questions we have.”

The council’s decision comes as Spring Place undergoes a change in management, revises its business plan, and looks to conduct an acoustical study to examine the noise impacts from activity on the roof, Egerman said.

“Spring Place [has] a very strong desire to be a viable good neighbor and good business within the city. And very simply, speaking we have no problems going on, and I think with some time and communication we can resolve this matter,” Egerman said.

Vice Mayor Julian Gold asked if the planning commission’s previous conditions need to be followed during the appeal.

“You’re starting from scratch. Those don’t need to be followed during the appeal,” City Attorney Laurence Wiener said.

Gold said that he supports the appeal, and added, “it would be wise that the spirit of those conditions be followed.”

Ostroff urged Spring Place not to use their reappearance before the planning commission as an excuse to remain out of compliance with the previous conditions.

“I think they should comply with those conditions as a condition to remanding it, rather than just having essentially a further delay,” he said.

While Councilwoman Sharona Nazarian supported sending the issue back to the planning commission, she suggested that the commissioners consider changing the building’s permit.

“Maybe it needs to be revisited in the sense that maybe they prefer to have a Soho House type of permitting,” Nazarian said. “We do have a rooftop ordinance … providing and allowing for rooftop usage. So, we want to encourage that, but not at the expense of the neighbors.”

Mayor Lili Bosse said that Spring Place and the planning commissioners must communicate clearly to ensure a successful process.

“I do feel confident that working alongside with the planning commission we can get to a place where this will succeed for everybody,” Bosse said.