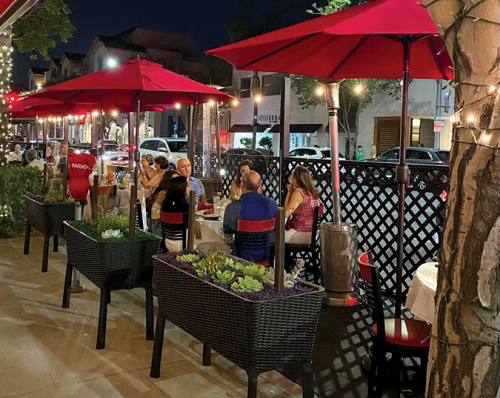 OpenBH began in June 2020 to help struggling businesses survive the pandemic. The City Council is considering making it permanent. (photo courtesy of the City of Beverly Hills)

The Beverly Hills City Council extended the OpenBH program until Sept. 30 as it works to convert the COVID-19-era initiative into a permanent program. But questions remain, including how the city will collect fees from participating businesses, and what design standards will be required for those businesses.

Vice Mayor Julian Gold said that while nine months is a good target, he does not think that the process of devising a permanent program should be rushed.

“While nine-months sounds good, realistically I would give ourselves some time and some breathing room and extend this for a year,” Gold said. “If we want to phase in fees that’s fine, but I’m not in a rush to do this.”

But the program’s success has come with a cost. Business that enroll in the program receive a no-fee special events permit that allows them to expand their services to adjacent outdoor areas. These outdoor spaces often take up metered parking spots, which otherwise would be earning the city money.

The nine-month extension could have a fiscal impact of more than $1.062 million, according to a staff report.

But the fee structure is likely to change, according to Councilman Lester Friedman, who leads the Code and Fee Changes Subcommittee with Gold.  Friedman did not disclose any details about the subcommittee’s findings, but said that he and Gold are prepared to share their findings during a regular council meeting.

According to the staff report, one of the potential fee changes include “the establishment of a tiered system.”

Friedman also stressed the importance of providing businesses with advanced notice of any changes they impose, and added that the City Council should solicit feedback from businesses before making any permanent changes.

“I can just see us coming back here in nine months, and then people saying ‘Well we didn’t know this was going to happen,’” Friedman said.

During their meetings, the committee discussed regulating parking spaces by factors like business frontage and vehicular visibility, allowing canopies and ensuring that pedestrian paths are distinct and unobstructed.

Bosse did not give a timeline for when the committee’s work will conclude, but she added that she was also supportive of further extending the program if the City Council and businesses are not ready by Sept. 30.

O’Farrell reflects on success during tenure on City Council