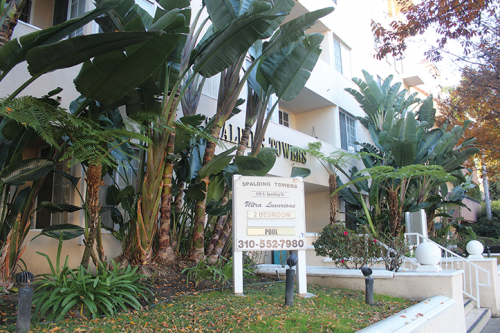 Amid historic vacancy rates, the Beverly Hills City Council’s vote to prohibit landlords from evicting tenants for major remodels seeks to maintain the quality of the city’s housing stock while protecting renters. (photo by Joey Waldinger)

The Beverly Hills City Council approved new protections for renters during the Dec. 13 meeting, removing provisions from the rent stabilization ordinance allowing landlords to evict tenants for the purpose of a major remodel.

The unanimous vote came after a lengthy discussion, with advocates for landlords claiming there is insufficient data to justify the council’s decision, and that making it harder for landlords to renovate their buildings will decrease the quality of the city’s housing stock.

For years, Beverly Hills had been the only city with a rent stabilization ordinance that allowed landlords to evict tenants for major remodels, according to a staff report.

Councilwoman Sharona Nazarian said the council was voting on a complicated issue. Many landlords, already facing restrictions and fees that could discourage them from conducting improvements, lost tenants during the COVID-19 pandemic, she said.

Meanwhile, the cost of living has shot up, making it harder for renters to pay their bills, she said.

“I think it’s extremely important for us to protect our tenants, but at the same time we need to be mindful of not putting in so many restrictions that people don’t want to utilize Beverly Hills to create housing,” Nazarian said.

Mayor Lili Bosse said the rent stabilization committee was established to try and find this balance.

“I know that it’s a very challenging commission, and I know it’s very spirited, but in order to have a quality of life for the tenants, the landlords also have to have quality of life. And I think that’s what we’re trying to balance here,” she said.

In a written comment, Max Sherman, associate director of government affairs at the Apartment Association of Los Angeles, stated the change was unnecessary, given that no evictions have been carried out in the city for the purpose of a major remodel since 2017.

More than half of the city’s housing stock was constructed before 1950, he stated, adding that rent control already decreases landlords income, affecting their ability to make discretionary investments in their properties.

“It is therefore vital that major renovations continue to be encouraged and remain a permissible grounds for eviction,” Sherman stated.

Councilman Lester Friedman said he was concerned about maintaining high quality apartments in the city. He asked whether landlords tend to conduct renovations during tenant turnovers, given that the remodeling provisions have been so infrequently used to evict tenants.

Deputy director of rent stabilization Helen Morales said the city does not have data on how many landlords have conducted renovations during turnover periods. However, she said the city has a historic 8% vacancy rate, largely due to the COVID-19 pandemic, and 55% of occupied units are occupied by renters who have moved in since 2016.

The city does not keep data on the number of units that are being used as Airbnbs, Morales added.

Vice Mayor Julian Gold also stressed the importance of gathering more data on reasons for Beverly Hills’ vacancy rate, including whether vacancies are concentrated in certain parts of the city.

Suggesting a solution, Mirisch said the council should add a provision to the rent stabilization ordinance that the city be supplied with a report explaining why the tenants move out 30 days after a unit is vacated.

“Is it because these buildings are crumbling and people are maybe looking for ritzier digs, or is it maybe because they can’t afford them? Is it because of COVID?” Mirisch said. “I think that will give us more data, and allow us to draw the conclusions [Gold] was suggesting.”