‘Weird’ parodies the music biopic as it should 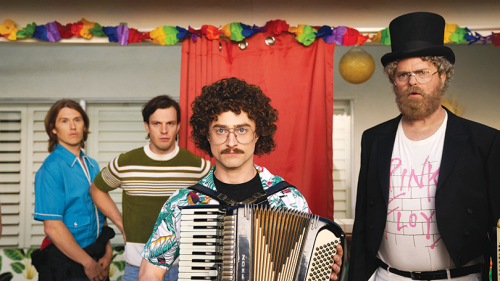 A young Al Yankovic (briefly played by David Bloom) answers the door to a traveling accordion salesman, mesmerized by the box-shaped device that would one day become his signature sound. But dear dad (Toby Huss) wants none of it, beating the salesmen to a pulp. We’re talkin’ body slam, chair smash, rapid-fire face jabs.

That makes sense. Al’s parents already told him he should change everything about himself, drop his unrealistic dream to write words to other artists’ songs, a sentiment that sticks around. Then comes a polka party, what all the cool kids do when their parents are out of town.

“Weird: The Al Yankovic Story” is a special kinda music biopic. It bears in common with over-the-top comedies like “Popstar: Never Stop Never Stopping” or “Walk Hard: The Dewey Cox Story,” and that’s how it should be.

“Weird” isn’t a based on a true story. The most prominent comedy musician need not bother with a pseudo-honest account of his life’s work. Only something outlandish will do. After all, what’s more fitting than a parody music biopic about the most popular parody musician?

But who dares don the stache and curly fro? Harry Potter, the boy who lived, is the man for the job, and he hits every note perfectly. Does he embody the real Weird Al, nope. He doesn’t need to for this unhinged fantasy.

For anyone looking for the unbridled, factual story of the accordion player behind “Eat It” and “Amish Paradise,” Wikipedia has more answers. Did you ever wanna learn how he navigated studio politics and copyright law? Google is free. How about the childhood origin of a polka-lovin’ nerd going platinum? Bing it. 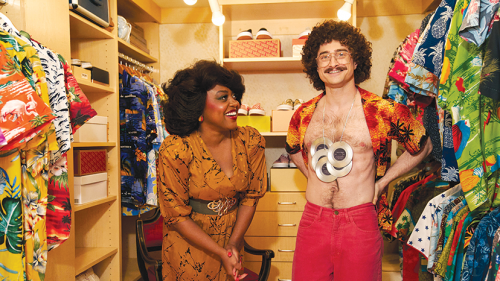 In lieu of the truth, experience a modern-day “Naked Gun.” Sure, “My Sharona” spoof “My Bologna” might’ve been Weird Al’s first mainstream hit (a rare moment with some truth), but he certainly didn’t have a dramatic moment of inspiration – played for solid laughs – whilst making sandwiches for his roommates.

In “Weird,” that’s where his career takes off, with only a few hiccups. He lulls a tough dive-bar crowd, impresses a private party of the greats, from Pee-Wee to Warhol (half the fun is discovering the cameo behind each getup), and winds up in a torrid love affair with Madonna (Evan Rachel Wood) – reportedly, the pair have only met once for 45 seconds.

This all might seem like spoilers, but a complete synopsis wouldn’t ruin anything. It’s all about tone and a complete commitment to featuring a story so bombastic, so absurd.

“Weird” works on every level. A dramatic score deceptively sets the tone while Diedrich Bader, a deep voice normally reserved for an animated Batman, narrates as Al at key moments. A sea of prominent comedians glitter the background – everyone clearly wants in.

All hail Alfred Matthew Yankovic, but the creative genius here is writer-director Eric Appel making his inaugural migration from TV series to features. While he creates a piece of pure fiction, he does employ real folks with some level of involvement.

Rainn Wilson’s Dr. Demento, a mentor to Weird Al, is actually real, despite how ludicrous his characterization. And, of course, there’s Madonna, whose “Like a Prayer” received a parody cover. Wood’s depiction of the pop icon, like Radcliffe’s, need not concern itself with authenticity.

That’s part of the film’s brilliance: anything can happen. “Weird” effectively deflects any criticism with the power of its madness. The charm will likely speak to viewers more familiar with Weird Al’s body of work, but the commentary on stardom is quite universal.

Frankly, most music biopics bend the truth always. Who knows what’s true, what’s added for dramatic effect, what’s omitted at an artist’s request? “Weird” might be the most honest of its kin, especially since Yankovic serves as a producer and supporting character Tony Scotti, whose Scotti Bros. Records helped launch Weird Al.

The actual life of Weird Al is quite fascinating, and that makes “Weird” so delightful. His story is already out there, so why not tell a silly one instead that matches his zany career that spans more than three decades.