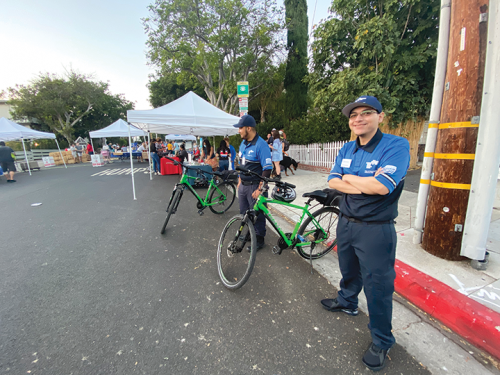 To improve public safety, the city of West Hollywood launched a new toll-free phone number for residents to reach the city’s Block by Block Ambassadors Program.

Block by Block, which provides security and hospitality services, can be reached 24 hours by calling (833)WEHO-BBB, or (833)934-6222. Although the phone number is currently only functioning for voice calls, a text option will be implemented in the future.

“The new number has been designed to be easy to remember so that residents and the WeHo business community, as well as visitors, can call Block by Block for help,” Mayor Pro Tempore Sepi Shyne said.

The toll-free line will allow community members and visitors in West Hollywood to get support with non-emergency and non-violent safety concerns. In an emergency, residents should always call 911.

Block by Block security ambassadors assist community members and visitors by maintaining uniformed foot and bicycle patrols in neighborhoods, conducting safety escorts and providing guidance, information and directions. They also provide in-person responses to non-emergency and non-violent calls for service. In the event of an emergency, the ambassadors work in partnership with law enforcement personnel from the West Hollywood Sheriff’s Station.

The new phone number is the city’s latest expansion of the Block by Block program. In recent weeks, the program added personnel, bringing the total number of security ambassadors to 85, and implemented four new kiosks throughout the city.

“The expansion not only adds boots on the ground, but also more visibility around our community and neighborhoods,” Erickson said. “Additionally, their continued interactions with businesses and residents helped establish relationships and points of contact should anyone need these services. It is a critical tool we have to help ensure all people feel safe and secure in West Hollywood.”

As part of the decision, the two deputy positions would not be eliminated until all Block by Block members were staffed. In June, Erickson expressed concern that the city could have a difficult time staffing and training ambassadors quickly, and though the program has now been fully staffed, retaining ambassadors is still a priority, he said.

“Hiring is always a concern, and I want to ensure that those hired now are retained for the long term here in West Hollywood so they can build trusted relationships with our community, residents and businesses,” he said. “I’m glad to see that we have and are actively hiring [safety ambassadors], and community safety is always my No. 1 concern and one that I speak to residents and businesses about daily.”

Although the program has been fully staffed, the City Council postponed the decrease of the two deputies until this month. The issue is expected to be addressed at either the Dec. 5 or Dec. 19 City Council meetings.

Shyne said the council will review the city’s crime statistics and the Block by Block program in March and decide whether to decrease by another three deputies.

For now, though, she said the city has seen positive changes with public safety as a result of the expanded Block by Block program, and she looks forward to working with newly-elected Sheriff Robert Luna to create a “more effective relationship that works for West Hollywood” while studying the possibility of WeHo creating its own municipal police department.

“Public safety is a priority for us. The relationship that we have had with the LASD has not provided the type of safety that our residents want,” Shyne said. “Any type of change is difficult and brings up fear. What we have experienced is that doing the same thing and expecting a different result does not work. We have chosen to create incremental shifts and move West Hollywood in a new direction towards better safety for all.”