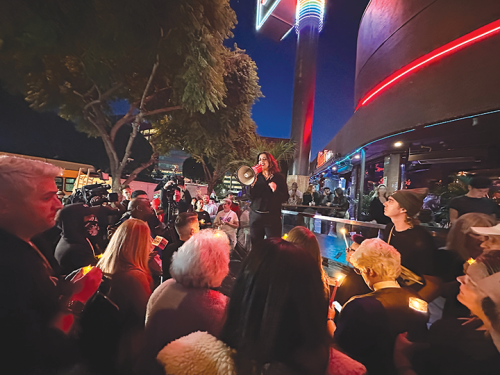 Mayor Pro Tempore Sepi Shyne spoke at a Nov. 20 vigil in support of the victims of the Club Q mass shooting in Colorado Springs. (photo by Rance Collins)

While Colorado Springs, Colorado, is more than 1,000 miles from West Hollywood, the ripple effect of the Nov. 19 mass shooting at Club Q was felt far across the Rockies. On Nov. 20, a vigil was held in front of Rocco’s WeHo to memorialize the five people killed and show support for the 25 injured at the Colorado Springs nightclub.

The attack took place the night before Transgender Remembrance Day, which was recognized by the city of West Hollywood following the vigil. Two of the deceased Club Q victims were transgender. Additionally, it was reported that a trans woman helped to subdue the shooter by stomping on him with her high heels.

“Are we surprised trans people are badass when we’ve made them fight their entire lives?” West Hollywood Poet Laureate Brian Sonia-Wallace said.

“As a city with a large LGBTQ population, West Hollywood is, and has always been, a safe haven for LGBTQ people,” Mayor Lauren Meister said. “As such, it is important that we show our commitment to protecting our LGBTQ community – residents, businesses and visitors. Many in the community patronize businesses in our Rainbow District and want to know that we care about their safety, that we support their right to be who they are and that we stand with them again hate and violence. For me, participating in the candlelight vigil is about expressing support and solidarity needed to move forward.”

“As an LGBTQ+ city and tourist destination, it is important for the West Hollywood community to come together, express ourselves and stand in solidarity with the victims of the Club Q shooting and against hate crimes against our community,” Mayor Pro Tempore Sepi Shyne said. “In doing so, we let our LGBTQ+ siblings who have been affected by this act of terrorism and hate know that their pain is felt here and they are not alone. The vigil was community members having a safe space to heal and our allies coming together to show our LGBTQ+ community that they stand with us.”

Councilman John Erickson pointed out how clear and present the danger remains for the community. He said that while he was speaking at the vigil, he “literally got texted a death threat.”

“I had to deal with the sheriffs [to report the threat] and everyone else. It’s a really scary time because people are incensed and empowered by this rhetoric out there that just is pitting us versus them. And I know one thing that I saw on Sunday at that vigil was it’s not an us versus them for [West Hollywood]. It’s an us together and how we can do all that we can,” Erickson said.

Sonia-Wallace said that the incident highlights the importance of having LGBTQ+ gathering spaces.

“It feels more vital than ever now to have a place for queer people to gather and share their stories, a place beyond dancing for raw emotion, for listening and processing — for remembering that, however we’re feeling right now, we are not alone,” Sonia-Wallace said. “An attack like this is an attack on our truth, and our job in response is to show that our truth is irrepressible.”

Councilman John D’Amico discussed the importance of West Hollywood speaking out as a city in times of tragedy.

“Every time we organize a protest, we remind people here in L.A. County and across the country that being a safe community that values and protects its residents is an American value,” D’Amico said.