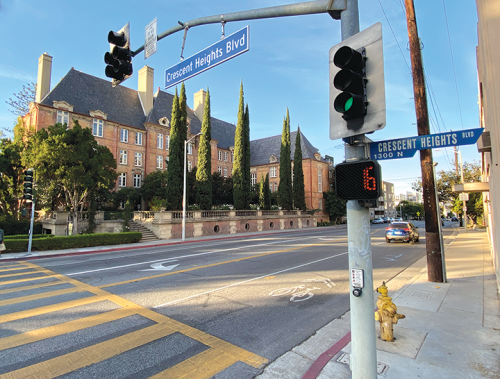 Bicycles will soon be able to roll down Fountain Avenue more safely. The West Hollywood City Council voted unanimously at its Nov. 21 meeting to go forward with a pilot plan for protected bike lanes for the street, which is widely known as a cut-through option to avoid heavy traffic along Santa Monica and Sunset boulevards. Fountain Avenue is so famous for this distinction that when Johnny Carson asked Bette Davis if she had advice for young actresses trying to make it in Hollywood, she replied, “Take Fountain.”

“[The pilot study] will include reducing lanes for vehicular traffic to accommodate protected bike lanes,” Mayor Lauren Meister said. “My goal is to make the street safe for all – the residents who live there, pedestrians, bicyclists, as well as commuters.”

A study by the city presented three options along Fountain Avenue to residents, and also included the potential for unprotected bike lanes or to keep the street as is. According to West Hollywood Councilman John Erickson, the overwhelming majority of residents wanted protected bike lanes.

“I salute any attempt to reduce accidents, to improve accessibility and, of course, to tackle climate change. That said, as a 16-year resident of North Kings Road, I have concerns,” resident Sarah Adolphson said during the public comment section of the meeting. “While something should be done to that street, I do not think the presented options are the answer. I’m primarily worried about the reduction in parking. North Kings and Flores and many streets that connect to Fountain already have limited parking spots for residents, let alone our guests. A reduction in parking on Fountain will only exacerbate that situation. I’m also concerned about the diversion of traffic. It’s not going to get rid of traffic. It’s just going to move it around.”

Erickson said that alternative parking options will be explored by city staff.

“Parallel parking on streets actually takes up more room than diagonal parking. And so as long as the flow of traffic works there, we can change to diagonal parking,” he said, going on to explain that expansion of permit parking in surrounding streets would also be considered.

“In terms of implementation, I do share some of the concerns of residents regarding the loss of residential parking spaces and increased congestion,” Meister said. “However, we will determine if these are barriers to success when we conduct the pilot.”

Many residents attended the Nov. 21 meeting and spoke in favor of the pilot program.

“Unfortunately for car owners, they own a vehicle that takes up approximately 120 square feet of real estate at any given time,” resident Annie Jump Vicente said. “People on foot take up about three square feet. Bicyclists take up about 15 square feet. Car owners need to understand that [they have] nine to 40 times more space that either a pedestrian or bicyclist, plus their car takes up that space when not in use. Cars not in use are obstructions for people using the road. Get rid of them. Getting rid of the most parking spots is crucial to safe streets.:

“There will be some parking spaces lost, but I directed staff to look at creative ways of increasing parking on the side streets such as angled parking rather than parallel where feasible,” Mayor Pro Tempore Sepi Shyne said. “Our pedestrians will finally have ADA-compliant widened sidewalks. Our bicyclists and those who use other alternate forms of mobility such as scooters will be able to ride safely, and our residents will have less traffic and slower cars which will make Fountain safer for all.”

Erickson said that the bike lanes would likely be created in 2023, though a specific date will take time to determine.

“This is a long sought-after need and change, and we’re all doing it. We’re all doing what we can to improve safety for everyone,” he said.

“We made a bold choice to return Fountain Avenue to the neighborhood it serves – to make real our promise of safer walkable, rideable, enjoyable streets,” Councilman John D’Amico said. “It’s so easy for me to see the future Fountain as a tree lined avenue, with people casually walking by while others ride their bikes and scooters in a protected bike lane, all while still allowing cars to get to their destinations.”

WeHo race has Byers in second, Heilman and Wright jockey for third

Join in the holiday spirit at The Ebell of Los Angeles

You left out of your report that currently there are 37,000 cars per day on Fountain and between 34-146 bicycles. The bike lanes are estimated to cost $9million and displace 13,000 cars per day which will flow to other arteries and neighborhood streets.

The 67% who voted for the option were not given all of these facts before voting so I am not sure how important the survey results are to the decision making.