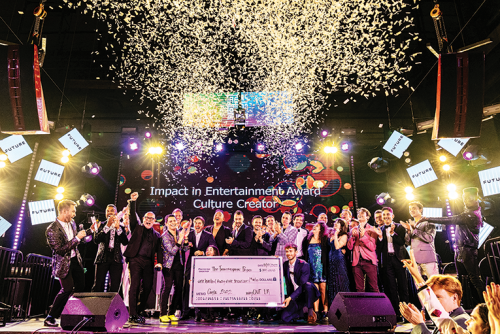 The nonprofit wayOUT started in San Francisco in 2016, ultimately expanding to other cities over the next several years, including Los Angeles in 2019. The group, which is completely comprised of volunteers, works to uplift LGBTQ+ youth, raising money that invests in support centers within their communities.

Unlike like Los Angeles, where resources are widely available, South Dakota lacks critical resources. The state is the hub for Susan Williams’ The Transformation Project, which focuses on giving transgender youth resources and educating the community.

Williams began her organization after her own child came out as trans. She discovered that in South Dakota, there was hardly anywhere to go for assistance for her child and family.

Chapter co-president Brady Valashinas, alongside Richard Gadsden, of wayOUT, grew up in L.A., but said he connects with LGBTQ+ youth who grew up in less-accepting environments.

“We see ourselves as like a bridge between more liberal, more accessible cities like Los Angeles and New York and San Francisco, to the rural, more conservative communities in the country, where LGBTQ+ organizations just don’t have access to the resources, the financial opportunities, the partnerships, all the kinds of stuff that we do here.”

Valashinas said that the organization hopes to create accepting communities all over the country.

At wayOUT’s Nov. 12 “gayla,” the organization raised over $145,000 through ticket sales and live auction items, which will all go The Transformation Project.

“We just couldn’t believe it. The most we’ve ever raised in L.A. We were hoping to break $100,000 because we’ve never done that before. And we honestly can’t even believe what we were able to achieve,” Valashinas said.

“In 2021, [our organization] raised $87,000,” Williams said. “To see almost double come in from WayOutLA has been unbelievable. Our programming costs will be covered by this funding – our mentorship program, our welcome kits, support groups and more. We hope to open South Dakota’s first LGBTQ+/2S (lesbian, gay, bisexual, transgender, queer or questioning and two-spirit) center in the state in 2023, and this financial gift will give us a great start on getting either purchasing or renting a building and doing the renovations needed to be able to provide a beautiful and safe space for youth to come together. As we work to provide free clothing to transgender people across the state and a $50 gift card for gender-affirming undergarments to each individual, this money will help so many more people across the state of South Dakota than we’d ever imagined.”

Auctioneer Michael Ferman handled the fundraising during the live auction portion of the evening.

“After 20-plus years of working as a benefit auctioneer, I can honestly say Saturday’s event was one of the most memorable,” Ferman said. “The bidders were extremely eager and willing to play along and invest big to the wayOUT cause. The crowd was lively and welcoming. I was able to let my guard down and really just have fun with them. Every item we sold ended in a spirited bidding war. Paddles were raised high in the air before each item’s price was even set. This was the perfect fundraising storm.”

At the event, “Bros”-writer and star Billy Eichner was honored with the Impact in Entertainment Award: Visible Voice, while David Collins, the mind behind “Queer Eye for the Straight Guy” and “Legendary,” was given the Impact in Entertainment Award: Culture Creator. Collins announced at the close of the evening he was chipping in $5,000 for the Transformation Project.

“Crazy Ex-Girlfriend” and “Reboot” writer and actress Rachel Bloom, meanwhile, served as co-host. Bloom chipped in $7,000 for one auction item and volunteered her services for the event.

“Every single one of the performers donated their time, and was incredibly compassionate and giving. They were all just so excited to be a part of it. We just feel so fortunate to be able to know and work with people like that, and to see the talent in that room. To know that everybody there was donating [their talent] was just also another layer on top of everything. It just it overwhelms you, honestly, with emotion,” Valashinas said.

“As a gay man from rural Pennsylvania, raising funds to help educate and nurture young LGBTQ+ people from similar areas in country makes me unbelievably proud,” Ferman said. “wayOUT gives us all the opportunity to be the people we wish we had growing up.”

It’s party time in the city!