Two in custody for robbery on La Brea Avenue 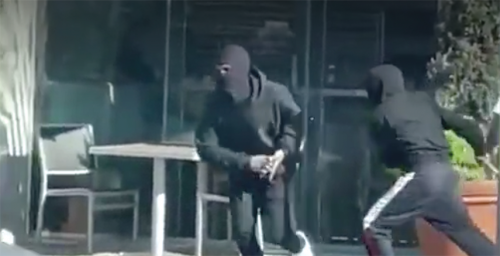 A video shows two men after they allegedly robbed a victim near Sixth Street and La Brea Avenue. (photo courtesy of the LAPD)

Two male suspects were arrested on Nov. 26 for allegedly robbing a victim near Sixth Street and La Brea Avenue and stealing a Rolex watch.

The robbery, captured on a video, shows two men wearing ski masks and black clothing robbing a victim on the sidewalk before running to a silver car and driving away. Patrol officers located the vehicle nearby and began a pursuit, police said.

The suspects collided with another vehicle a short distance away, and officers arrested one of the assailants. The other suspect fled and was arrested a short time later by K9 officers from the LAPD’s Metropolitan Division.

The robbery victim was not injured, but the driver of the vehicle struck by the suspects was treated for minor injuries, police said. 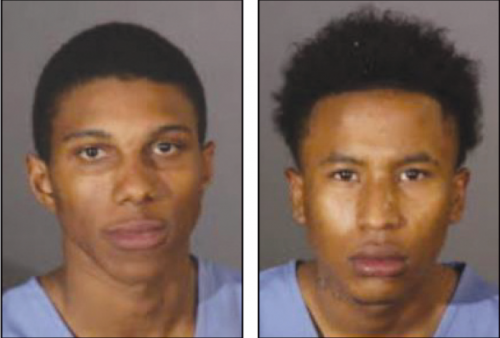 Tyler Dumas, left, and Edwin Witty were arrested for allegedly robbing a victim on Nov. 26. (photo courtesy of the LAPD)

The two suspects were identified as Tyler Dumas, 20, and Edwin Witty, 19, both residents of Los Angeles. Dumas and Witty are facing robbery charges and are being held on $1 million bail.

Detectives with the LAPD’s Follow-Home Robbery Task Force are investigating the robbery and believe the suspects are involved in additional crimes. The Follow-Home Robbery Task Force, which is based in the LAPD’s Robbery-Homicide Division, was established in November 2021 in response to a crime trend involving people being robbed of expensive jewelry and handbags. Many of the follow-home robberies occurred in the Hollywood, Melrose, Beverly Grove and Wilshire areas.

The LAPD released the video and photographs of the suspects, which can be viewed by visiting lapdonline.org. Anyone with information is urged to call detectives at (213)486-6840. During weekends and off-hours, call the LAPD’s hotline at (877)LAPD247. Those who wish to remain anonymous can call Crime Stoppers at (800)222-TIPS, or visit lacrimestoppers.org.