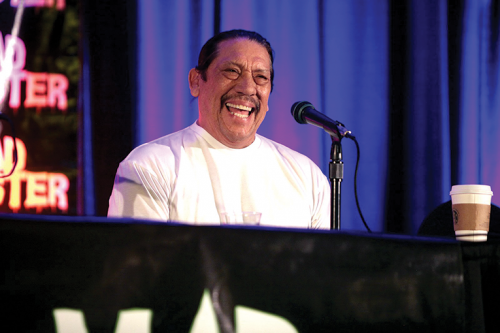 Danny Trejo will receive the Experience Strength and Hope Award. (photo courtesy of Writers In Treatment)

Actor, restaurateur and recovery advocate Danny Trejo will be honored by Writers In Treatment with the Experience Strength and Hope Award on Wednesday, Dec. 7, at the Skirball Cultural Center.

The Experience, Strength and Hope Award is given annually to an individual who has written a memoir about their career and honest journey from addiction to sober living. Last year’s award recipient, KTLA-TV anchor and reporter Courtney Friel, will present the award to Trejo. His book “Trejo: My Life of Crime, Redemption, and Hollywood,” takes readers through his days of crime, time in prison, struggle with addiction, recovery and success in Hollywood.

“We are thrilled to honor the one and only Danny Trejo, who bravely poured his heart out in his memoir,” said Leonard Lee Buschel, co-founder of Writers In Treatment. “The past few years have been a challenge for those in need of sobriety. By lending his encouraging and influential voice to the fight, Mr. Trejo has inspired countless people to seek help as they begin their journey to recovery.”

Tickets are $125. A catered reception will begin at 5, followed by the program at 7 p.m. The Skirball Cultural Center is located at 2701 N. Sepulveda Blvd. For information, visit writersintreatment.org.