The holiday season invites some pretty sappy entertainment. If that’s your thing, rock on. But if you want something different, plenty of films and series premiere soon, and here are 13 palate cleansers, both the critical hopefuls and escapist options.

The new series picks up long after the events of the 1988 film, featuring a whole new adventure. The nostalgic appeal will certainly be high. And Warwick Davis looks fantastic in all the promos. The first episodes arrived on Nov. 30 with more to come throughout December.

Start simple on Dec. 1 with a Godzilla-level Norwegian troll flick. Is the latest take on Scandinavian folklore related to 2010’s “Trollhunter,” also Norwegian? Not sure. But the spectacle should fill in any logical gaps sure to follow.

If you haven’t experienced this bonkers superhero show, you still have time to catch up before the fourth season begins next week. Don’t expect the usual dose of world-ending turmoil. These outcasts mainly project their trauma on everyone around while confronting ludicrous foes, from a cockroach with delusions of grandeur to a shapeshifter in a steampunk time machine.

The lying wooden boy already had one terrible outing in September. But Guillermo del Toro knows how to fix it all with a stop-motion film that looks stunning and eerie at once. Most promos highlight the claymation process, and that’s enough for any fan of the medium. Besides, del Toro knows not bad films.

Brendan Fraser turned heads at the Venice Film Festival, receiving a six-minute standing ovation for his performance as a depressed teacher who excessively overeats. Oh, and it’s a Darren Aronofsky flick (the guy behind “Requiem for a Dream,” “The Wrestler,” “Black Swan”), so prepare to be scarred.

This miniseries tackles Octavia Butler, one of the most prominent Black sci-fi authors. Shockingly this is the first adaptation of her work. This won’t be an easy experience as Dana (Mallori Johnson) travels in time between her present and the antebellum South. Sounds heavy, but hope is high it’ll be a powerful, poignant experience.

More than a decade and multiple delays have passed since “Avatar” set domestic and world records. Will the Na’Vi’s trip to the beach successfully invite even more spectators to help James Cameron recoup the film’s $2 billion budget? Probably not, but it’ll probably be watchable.

“Yellowstone” is a peculiar mixed bag, an addicting and ideologically troubling as a modern-day cowboy “Sopranos” show. One flashback spinoff came and went, starring Tim McGraw and Faith Hill. But another will feature Helen Mirren and Harrison Ford. What? How? Of course, I’m in for no other reason than that.

Sure, the “Shrek” films gave up after the first sequel, but something about the animation style alone to this “Puss in Boots” sequel seems enticing. 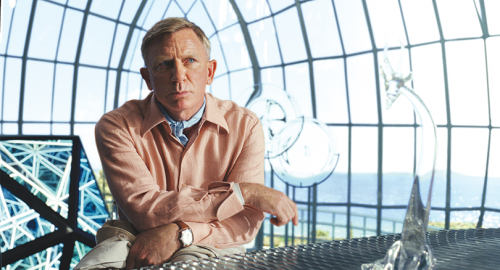 Daniel Craig is a standout in “The Glass Onion.” (photo courtesy of Netflix)

The “Knives Out” sequel is already in theaters, but drops on Netflix near Christmas Day. Plenty of critics confirm it’s a win, and how could it not be? Director Rian Johnson is a rare talent who turns anything he touches to gold. This whodunit series deserves all the love coming its way.

The “La La Land” direction switches from cutesy idealism to full Hollywood depravity in a Brad Pitt and Margot Robbie film about the early days. It looks as accurate as “300,” favoring madness and excess. Tobey Maguire sports some truly gross yellow teeth while he pitches stripper nuns as the next big thing.

“The Witcher” finally gets good, and then Henry Cavill announces his exit after the next season. Not to worry, as Michelle Yeoh appears, an elven warrior over a millennium ago when the first Witcher arrived. Perhaps this one will get to the point quickly, unfettered by obligation to a book series that might make choices that don’t translate on screen.

Adam Driver rejoins “The Marriage Story” director Noah Baumbach for another dramatic feature with a seemingly innocuous plot description. Yet Baumbach knows not such simple answers to everyday hardships. Watch out for a stellar monologue of a pair shouting at each other. It’s somehow riveting.

Prosperity Market pops-up at Third and Fairfax on Dec. 3