The sun comes out at the Dolby for ‘Annie’ 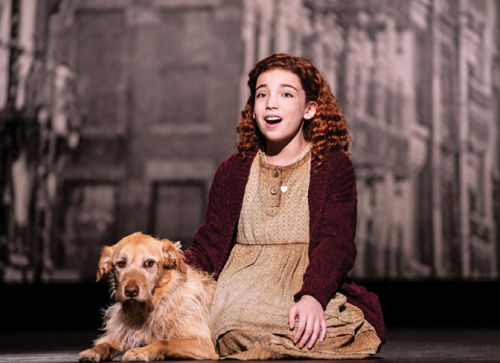 Ellie Pulsifer as Annie, Christopher Swan as Daddy Warbucks and Addison as Sandy star in “Annie,” playing through Dec. 18 at the Dolby Theatre. (photo by Matthew Muprhy and Evan Zimmerman for MurphyMade)

A throw-away joke in the musical “Annie,” refers to the titular character ending up “in the funny papers.” The line elicited a mild chuckle from the audience on opening night at the Dolby Theatre, and I realized that I might be one of the only people in the crowd who knows that the story was once a comic strip. “Little Orphan Annie,” turns out, ran in its last “funny paper” back in 2010. That comic, created by Harold Gray, made its debut in 1924, and was notable for its social commentary, particularly during the Depression.

For modern audiences, though, Annie starts and ends with the musical. “Annie” hit Broadway in 1977 and was a smash, taking home the Tony for best musical and running six years. Two revivals followed, along with West End productions, national tours and a nauseating number of school productions. There have been no less than three films based on the musical, most significantly the John Huston-directed 1982 adaptation starring Carol Burnett. Kathy Bates led a 1999 television film, and Jamie Foxx appeared in the 2014 theatrical version.

Oh, but that’s not all. NBC got Taraji P. Henson and Harry Connick Jr. for a live television production in 2021.

With music by Charles Strouse, lyrics by Martin Charnin and a book by Thomas Meehan, “Annie” features some of the most well-known tunes in popular culture, with oft-parodied “Tomorrow” and “It’s the Hard Knock Life” being perhaps the best-known songs.

Let’s sum this up: you know “Annie.” You can’t avoid “Annie.” “Annie” is as American as apple pie. And now through Dec. 18, it’s playing at the Dolby Theatre in Hollywood.

Annie’s an orphan in the 1930s. Miss Hannigan runs a terrible, drafty orphanage. Annie wants to find her parents. Billionaire Oliver Warbucks hosts an orphan for the Christmas holiday (obviously Annie). Falls for the adorable brat. Miss Hannigan is not about that life. There’s a stray dog named Sandy. Oh, and F.D.R. is there? Yes, the president. The New Deal president is a fully-formed character with his own showstoppers.

Ok, so here’s the thing about ol’ “Annie.” Some people find it cloying. The ensemble of orphans sing a lot. Some people aren’t into that kind of thing. It is also unabashedly sentimental. I mean, again, when you use the then-president of the United States as a kind of savior for the entire plot, you’re going to drift into saccharine. If you’re going to see “Annie,” you should just know that it’s unabashedly sentimental. People just seem to love or hate “Annie.”

But, good God, is it entertaining. I mean, “Annie” is a rollicking good time. There’s a reason the score is baked into popular culture. Every single song is a banger. I’m partial to “Easy Street,” which is staged to great effect in this version. Miss Hannigan is the sort of hammy, intentionally over-the-top part actors dream of, and Stefanie Londino just goes for it. Burnett’s film performance as Hannigan is probably the one people will always remember, but the great thing about the role is that an actress can go a million directions with every line reading. Londino makes a series of wonderful choices and is easily the funniest part of the show.

“Annie,” of course, lives and dies by Annie. The reason the play’s naysayers exist typically comes down to Annie. If played incorrectly, the character can be sickly sweet. She’s a sunny, optimistic child. She finds the bright side in every plight. You put that in the key of C, and it can be… well, annoying.

Ellie Pulsifer avoids this trap. The score is demanding for any performer, and it requires the young Annie to belt. I mean … she … has … to … BELT out “Tomorrow.” Pulsifer nails it. She brings down the Dolby. Tears it apart. Rebuilds it. Reopens it. Brings it down again. She received a well-deserved standing ovation at curtain call.

And, you know, I think I like “Annie.” Somehow, when Warbucks and the little tyke are singing “I Don’t Need Anything But You,” I felt this strange sensation deep in the heart Los Angeles long ago rendered immobile. At first the feeling was so foreign to me; I couldn’t put a word to it. What was this feeling?

To be fair, it could’ve been seasonal. I did just put up a Christmas tree this weekend, and the holidays always make me misty. But, by George Bailey, I was touched. The play was touching.

And, truly, if I can be moved by a show, then it is likely to move you, too.

For information and tickets to “Annie,” visit broadwayinhollywood.com/events/detail/annie2022. The Dolby Theatre is located at 6801 Hollywood Blvd.