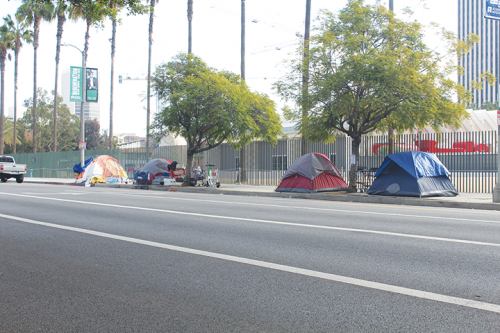 Tents have returned along Sixth Street near Fairfax Avenue. (photo by Joey Waldinger)

For the past several weeks, nearly a dozen tents were posted on the sidewalk along Sixth Street near Fairfax Avenue, along the rear of the Academy Museum and Los Angeles County Museum of Art. On Nov. 28, the Los Angeles Department of Sanitation conducted a clean-up operation at the site. However, six tents reappeared the following day. A representative for outgoing Los Angeles City Councilman Paul Koretz, 5th District, said the site has been flagged for services and the city will continue efforts to help people staying at the site. Despite the encampment being near the county museum and Academy Museum, the sidewalk is public property.