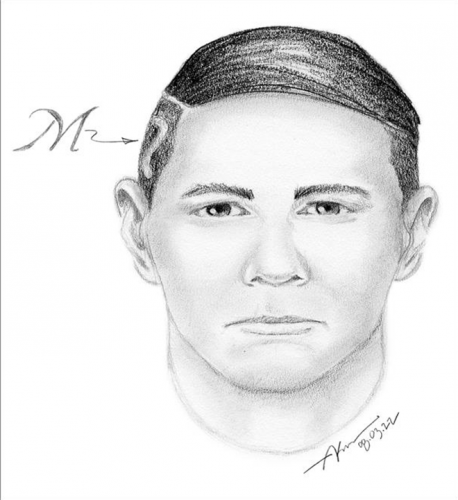 photo courtesy the LAPD
Police have released a sketch of the sexual assault suspect, who has had hairstyles with the letter M shaved on the side of his head. (photo courtesy of the LAPD)

The Los Angeles Police Department is asking for the public’s help in identifying a male suspect wanted for multiple sexual assaults in the neighborhoods around Santa Monica Boulevard and Western Avenue in East Hollywood.

Investigators said the suspect lures women into his vehicle, drives them to secluded locations and pulls out a handgun before sexually assaulting the victims. Police are not divulging how many times the suspect has struck or providing dates of the crimes due to an ongoing investigation. Detective A. Hodge, with the LAPD’s West Bureau Sexual Assault Unit, said the most recent assault occurred on Oct. 28.

“We are actually not quite certain how long it has been going on, and we are not divulging when the first crime was reported,” Hodge added. “A vehicle is involved, and he lures them into it.”

The suspect was described as a Latino man, approximately 25-35 years old, 5 feet 8 inches tall with black hair, brown eyes and tattoos on both arms. He drives a dark-colored, newer-model four-door sedan, possibly a Honda. The vehicle may have tinted windows and a rear spoiler, police said.

Victims have reported that the suspect goes by the name Mainer, Maynor or Mainor. The suspect has also been reported to have had hairstyles with a letter M shaved on the side of his head. Police believe he may have a military background and work as a security guard, as the suspect has been seen wearing a security jacket and badge. Hodge declined to provide any details about how authorities gathered information about the suspect.

Police released a sketch of the suspect. Anyone with information is urged to call detectives at (213)473-0447. During weekends and off-hours, call the LAPD’s hotline at (877)LAPD247. Anonymous tips can be made to Crimestoppers by emailing info@lacrimestoppers.org and visiting lacrimestoppers.org.