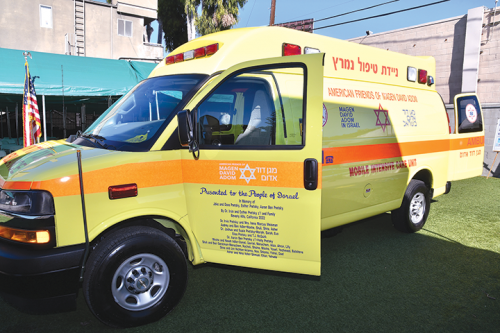 A specialized mobile intensive care unit was donated for use during emergencies in Israel. (photo courtesy of American Friends of Magen David Adom)

The people of Israel will have a new life-saving tool at their disposal thanks to local real estate professional and longtime Beverly Grove resident Rosalie Klein.

Klein donated $125,000 to American Friends of Magen David Adom for a specialized ambulance that will be stationed in Jerusalem and will be used throughout the region. Magen David Adom, which serves as Israel’s Red Cross, provides emergency medical services as well as blood services. The organization is not government funded and exists solely on donations from people around the world.

Klein donated the specialized ambulance, known as a mobile intensive care unit, in the name of her late husband, Morrie Flaster, and her late mother and father, Miklos and Dora Klein. Their names will be inscribed on the ambulance in tribute to their impact on the world.

“I look at it as it will save lives, and what’s more important than saving lives?” Klein said. “I believe in helping good causes. It’s a very humanitarian organization that does a lot of good. It was something Morrie and I believed in.”

The mobile care unit’s impact will be significant, said Uri Shacham, chief of staff for Magen David Adom. He said it is essentially a mobile emergency room that can respond to any situation. Staffed by emergency medical personnel, the units provide life-saving care in the field during natural disasters and terrorist attacks and are also equipped with technologically advanced equipment to treat heart attack and stroke patients. Crews communicate with doctors and provide care in the ambulances, reducing time lapses and streamlining the admitting process to ensure better outcomes for patients, Shacham said.

“During the lifetime of this [mobile intensive care unit], my estimation is that it will take care of between 8,000 and 10,000 incidents, and that means it will directly influence at least 10,000 people,” Shacham said. “Think of how many circles this donation will influence in the state of Israel. We have a saying in the Jewish Talmud, saying that the one who saved one life is as if he saved the entire world. So, how is it to save at least 10,000 lives and the lives of their immediate families? This is as impactful as one can imagine.” 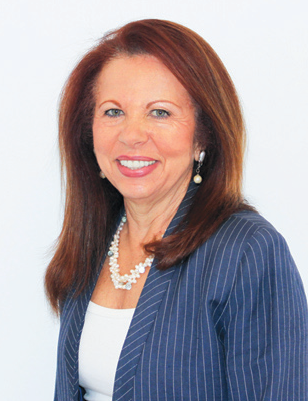 Klein worked on the donation with American Friends of Magen David Adom, the organization’s fundraising entity in the United States. She will be honored by the organization during a ceremony at 11 a.m. on Sunday, Dec. 4, at Chabad of Beverly Hills, 9145 Wilshire Blvd. To attend, RSVP to Dorin Esfahani, director of major gifts for American Friends of Magen David Adom, at desfahani@afmda.org.

Esfahani said another donor, Dr. Irvin Pretsky, who was raised in Beverly Hills and now lives in the San Fernando Valley, recently donated a mobile intensive care unit in memory of his late wife, parents and son. Pretsky was honored on Nov. 13 at Temple Beth Am at 1039 S. La Cienega Blvd.

Esfahani said she hopes the donations will inspire others to help.

“A lot of people may know someone whose life has been saved by Magen David Adom,” she said. “It’s the kind of thing that saves lives and really makes a difference.”

Klein said she was particularly pleased to donate the mobile intensive care unit in tribute to her husband, who died on Feb. 3, 2021. They had been married for 25 years.

“Morrie and I had wanted to do this for a long time,” Klein said. “After Morrie’s death, I thought this would be a way to do something that will help a large number of people in his honor.”