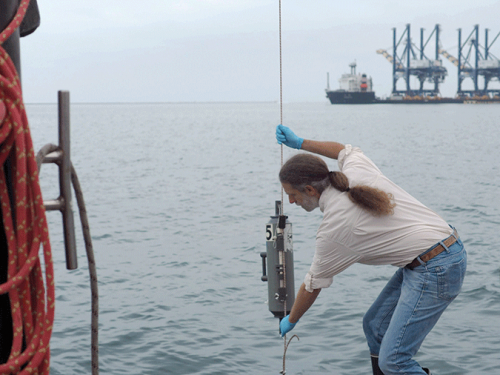 Measuring marine biodiversity with “environmental DNA” could allow rapid assessments of changes in marine life, making it a critical tool for managing our response to climate change. But eDNA only works well if key implementation steps are followed, according to a new study of the Los Angeles and Long Beach area published in the journal “PeerJ.”

“What do we need to know to use eDNA in the coastal ocean, and can we make it work well in an important urban setting? Those are the questions that motivated us to launch this study,” said Regina Wetzer, curator and director of the marine biodiversity center at the Natural History Museum of Los Angeles County.

eDNA uses genetic sequencing of samples from the environment (in this case, ocean water) to inventory biodiversity. “There are genes that differ enough between species that can be used as identification markers. Every organism sheds DNA by dropping skin cells or other materials, so we can take a cup of seawater, sequence the DNA in it, and use that to inventory organisms in the area,” said Zack Gold, lead author of the study.

The Port of Los Angeles and the Port of Long Beach form one of the largest port complexes in the world and are a site of intense environmental interest. That made it an interesting site to test eDNA’s ability to act as an effective tool for biodiversity assessment.

The study paired eDNA sampling and conventional ship-based trawl net sampling at seven sites in the port complex. eDNA detected nearly all of the 17 species of fish found in the trawls, but also detected an additional 55 native fish species. Detecting those additional species through conventional sampling requires many more sampling trips and at a high cost.

“We were happy to see eDNA validated alongside ‘conventional’ sampling, but we were really excited to see the extra information that came from the eDNA,” said Dean Pentcheff, researcher and program manager of the Diversity Initiative for the Southern California Ocean at NHM.

Based on this pilot project, the authors assembled a set of recommendations for managers considering eDNA as a tool for biodiversity assessments. The recommendations cover careful selection of the identifying genes and specific advice on how to clean up the sequence data from eDNA samples before searching for sequence matches.

“These samples of the environment are like time capsules that we’ll be able to exploit in the future,” said Adam Wall, Crustacea Collections manager at NHM.

Co-authors on this study include researchers from a broad suite of institutions, and it was supported by funding from the Port of Los Angeles and the Port of Long Beach.

JFSLA gives thanks to the community