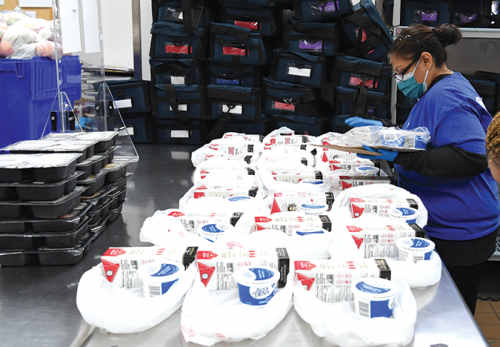 Celebrities, public officials and volunteers came together during the early morning hours on Thanksgiving Day to prepare and deliver 7,400 meals to Project Angel Food’s clients, many of who are battling serious illnesses. Outgoing Los Angeles Mayor Eric Garcetti was among the group of volunteers.

“Mayor Eric Garcetti epitomizes what it is to be part of a community and lift one another through compassion and service,” Project Angel Food CEO Richard Ayoub said. “As he rolled up his sleeves and helped plate meals, he brought attention that while [it was] a day most of us [were] surrounded by people we love, we need to remember that some people don’t have that. He reminded us that no Angeleno should be alone, and with a warm smile, conversation and a meal, our volunteers can change the entire day for our clients [and] become angels in the City of Angels.”

For many of the celebrities joining Project Angel Food’s Thanksgiving Day volunteer pool, the day was about sharing the experience with family. Jackson said he brought his children because, “I want to teach my kids to be grateful and thankful for everything that we have, and when you have the capability to give to other people, do it.”

He also talked about the death of friend Leslie Jordan, a Project Angel Food supporter who died on Oct. 24.

Rinna reflected on the fact that Project Angel Food is the primary source of food for most of its clients.

“It’s so important because that is going to be their only meal of the day,” Rinna said.

The 7,400 meals delivered on Thanksgiving Day included 1,600 traditional turkey dinners to critically ill men, women, children and their caregivers, 5,600 medically tailored meals and breakfasts regularly scheduled for Thursday delivery, and another 200 meals to People Assisting the Homeless for residents in two of PATH’s interim housing and permanent supportive housing sites.